View src
watch 01:33
House of the Dragon Trailer - The Loop
Do you like this video?
Play Sound
Boyhood 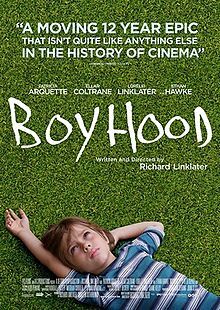 Boyhood is a 2014 American coming-of-age drama film, written and directed by Richard Linklater, and starring Patricia Arquette, Ellar Coltrane, Lorelei Linklater, and Ethan Hawke. The film was shot intermittently over the course of a 12-year period, from 2002 to 2013, and depicts the adolescence of a young boy in Texas growing up with divorced parents.

Boyhood premiered at the 2014 Sundance Film Festival and was released theatrically on July 11, 2014. The film also competed in the main competition section of the 64th Berlin International Film Festival, where Linklater won the Silver Bear for Best Director. It was declared a landmark film by many notable critics, who praised its direction, acting, ingenuity, and scope. The film was nominated for five Golden Globe Awards, winning Best Motion Picture – Drama, Best Director, and Best Supporting Actress for Arquette. It also received six Academy Award nominations, including Best Picture, Best Director, and won the Best Supporting Actress award for Arquette.

In 2002, six-year-old Mason Evans, Jr. (Ellar Coltrane) and his older sister Samantha (Lorelei Linklater) live with their single mother Olivia (Patricia Arquette) in Texas. Mason overhears Olivia arguing with her boyfriend, saying she has no free time. Olivia moves the family so she can attend the University of Houston, complete her degree, and get a job.

In 2004, Mason's father, Mason Sr., (Ethan Hawke) visits Houston and takes the children bowling. He promises to spend more time with his kids. When Mason Sr. drops the children off at home, he argues with Olivia and leaves while Mason and Samantha watch helplessly from a window. Olivia takes Mason to one of her classes, introducing him to her professor, Bill Welbrock (Marco Perella). Mason sees Olivia and Bill flirt with each other.

In 2005, Olivia and Bill have married and blended their two families, including Bill's two children from a previous marriage. They share experiences such as playing video games and attending a midnight release of Harry Potter and the Half-Blood Prince.

In 2006, the children bond with Mason Sr. as he takes them out for a day in Houston, culminating in a Houston Astros game and a sleepover at his house with his roommate Jimmy. Olivia continues her education and is initially supportive of Bill's strict parenting style, which includes many chores for the children and a forced cutting of Mason's long hair. Bill becomes abusive as alcoholism takes over his life. When he assaults Olivia and endangers the children, Olivia moves the family to a friend's house and files for divorce.

In 2008, Mason Sr. learns that Samantha has a boyfriend and talks to her and Mason about contraception. He and Mason go camping at Pedernales Falls State Park and bond over music, Star Wars, and Mason's blossoming interest in girls.

In 2009, Mason and Samantha have grown into their new lives in San Marcos, a town close to Austin. Mason is bullied by other students at school and teased on a camping trip, but also starts receiving attention from girls. Olivia teaches psychology at college and moves in with Jim, a student and veteran of the Afghanistan/Iraq War.

In 2010, by his fifteenth birthday, Mason has experimented with marijuana and alcohol. Mason Sr., remarried and with a baby, takes Mason and Samantha to visit his wife's parents. He gives Mason a suit and a mix CD of Beatles solo songs; Mason's step-grandparents give him a personalized Bible and a vintage shotgun. Mason becomes interested in photography.

In 2011, Mason is lectured by his photography teacher, who sees his potential but is disappointed in his lack of ambition. Mason attends a party and meets Sheena, who becomes his girlfriend. After Mason arrives home late one night from a party, a drunk Jim confronts Mason about his late hours. Olivia leaves Jim.

In 2012, Mason and Sheena visit Samantha at the University of Texas at Austin, where they share their hopes and fears about college, staying up late to watch the sun rise. They are caught sleeping together in Samantha's dorm room by her roommate.

In 2013, during Mason's senior year in high school, he has a painful breakup with Sheena, wins the silver medal in a state photography contest and is awarded college scholarship money. Mason's family throws him a graduation party and toasts his success. Mason Sr. gives him advice about his breakup. Planning to sell the house, Olivia meets Samantha and Mason for lunch and asks them to sort through their possessions. As Mason prepares to leave his mother's new apartment for college, Olivia breaks down, saying she is disillusioned by how fast life has flown by, and claims there is nothing left in her life but her death. At Sul Ross State University in Alpine, Mason moves into his dorm room, and meets his new roommate Dalton, his girlfriend Barb and her roommate, Nicole. Barb gives Mason psilocybin mushrooms (emulsified in chocolate), which he takes. He goes hiking with the group at Big Bend Ranch State Park, where Nicole and Mason talk about seizing the moment; Mason tells Nicole that they are always in the moment.

Boyhood received near-unanimous acclaim from film critics. It holds a "certified fresh" score of 98% on Rotten Tomatoes based on 261 reviews, with an average rating of 9.3/10. The critical consensus states, "Epic in technical scale but breathlessly intimate in narrative scope, Boyhood is a sprawling investigation of the human condition." On Metacritic, the film has a full score of 100 out of 100, based on 50 critics, indicating "universal acclaim". It is the highest rated of all films reviewed upon their original release on the site. It also holds the highest number of reviews for a film with a score of 100, and is among the highest-scoring films ever reviewed. Both Metacritic and Rotten Tomatoes listed Boyhood as the best-reviewed film of 2014.