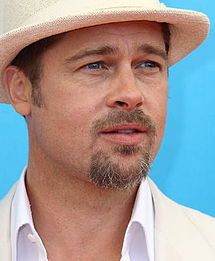 William Bradley "Brad" Pitt is an American actor. He was born on December 18, 1963 to Jane Etta and William Alvin Pitt in Shawnee, Oklahoma, USA. He took acting classes and odd jobs in Los Angeles when he started his acting career. One of his odd jobs was dressing up as the El Pollo Loco chicken.

Brad Pitt got his start on Thelma & Louise, even though he had already taken many television roles before then. In 1994, he earned acclaim for his portrayal of vampire Louis de Ponte du Lac in Interview with the Vampire. In 1995, he starred in serial killer thriller Seven with Gwyneth Paltrow and Morgan Freeman.

Brad Pitt played Tyler Durden, an iconic character in Fight Club alongside Edward Norton. In 2000, he was in the film Snatch, in which he acted with a convincing and almost unintelligible Irish accent. In 2003, he starred in Ocean's Twelve with George Clooney.

He has recently starred in Moneyball and The Tree of Life.

He has worked with director Andrew Dominik twice; on the films The Assassination of the Jesse James by the Coward Robert Ford and Killing The Softly (2012). He played hit-man Jackie Cogan in Killing Them Softly.

Retrieved from "https://movies.fandom.com/wiki/Brad_Pitt?oldid=106120"
Community content is available under CC-BY-SA unless otherwise noted.