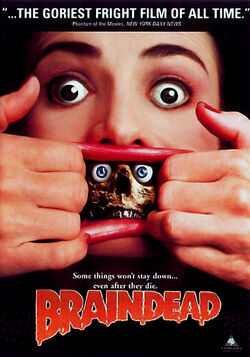 Braindead released as Dead Alive in North America, is a 1992 New Zealand comedic zombie movie directed by Peter Jackson. The film is widely regarded as being one of the goriest films of all time.

The first scene sets up the danger of the "Sumatran rat monkey" hybrid creature that "according to legend" resulted from the rape of tree monkeys on Skull Island by plague-carrying rats. Stewart, an explorer returning from the depths of the island with his guide and team, is carrying a rat-monkey in a cage and is stopped by fierce warrior natives that demand the return of the monkey. Stewart escapes with the cage to the rest of his team and a waiting Jeep, leaving his guide behind and the natives in hot pursuit. As the jeep takes off, Stewart's guide catches up and jumps on board. In the ensuing melee, Stewart gets bitten by the Rat-Monkey. Seeing the mark of the monkey's bite on his right hand, Stewart's men immediately hold down the infected explorer and amputate the appendage. A bite mark is then seen on his left arm, which swiftly results in the removal of that limb. Finally, they see a set of bloody scratches on Stewart's forehead and kill him. The title screen follows the man's dying scream, and as the opening credits roll the captured rat-monkey is shipped to Wellington Zoo in New Zealand.

Bob McCarron, recently known for his on-screen appearances as Dr Bob from the UK television show I'm a Celebrity Get Me Out of Here! and its German version Ich bin ein Star – Holt mich hier raus!, designed the special prosthetic makeup. He was awarded at Sitges-Catalonian International Film Festival and nominated for Saturn Award (see below for all awards).

The final scene to be filmed was the section in the park with Lionel and the zombie baby Selwyn. The movie was finished one week ahead of schedule and with $45,000 remaining, so Peter Jackson used all this remaining budget to film the park scene over the course of two days. He has gone on to say that this is his favorite scene and the funniest in the whole movie. 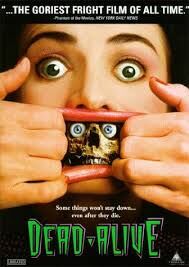 Wikiquote has a collection of quotations from or about:
Braindead
Community content is available under CC-BY-SA unless otherwise noted.
Advertisement