Start a Wiki
watch 01:48
The Loop (Movies)
Do you like this video?
Brazil 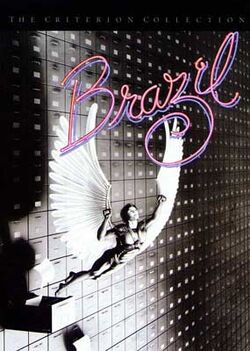 Set "somewhere in the 20th century", the retro-futuristic world of Brazil is a gritty urban hellhole patched over with cosmetic surgery and "designer ducts for your discriminating taste". The world of Brazil appears to be almost post-apocalyptic in nature. This is not due so much to the given enemies of the state (terrorists) but to a bureaucratic implosion. Brazil has become so hopelessly overcomplicated that entropy has taken over and the world appears to be on the perpetual verge of complete mechanical failure from all fronts. Layered over this is the increasingly insane amount of paperwork required to get anything done.

The story begins with Sam Lowry (Pryce), a low-level bureaucrat whose primary interests in life are his vivid dream fantasies to the tune of a 1940s big-band hit "Brazil", inadvertently getting involved with terrorist intrigue when his dream woman (Greist) turns up as the neighbor of a man ("Buttle") arrested as a terrorist instead of another man ("Tuttle") on account of a typographical error. Other people in Sam's life include the real Harry Tuttle (De Niro), the terrorist who is actually a renegade heating technician and the intended target of Buttle's arrest order; Jack (Palin), a family man and childhood friend of Sam's whose actual occupation is a government torturer; and Sam's mother (Helmond). It also features his nervous boss played by Ian Holm and a friend of his mother who undergoes a series of increasingly disturbing cosmetic surgeries.

A mysterious wave of terrorist bombings is met by an increasingly powerful Ministry of Information (MOI), whose jackbooted thugs never admit to arresting and torturing the wrong man. Sam's simultaneous pursuit of the truth and the woman draws him into the higher echelons of the Ministry, despite Jack's repeated efforts to warn him that his quest will inevitably bring Sam into more danger than he can cope with.

Gilliam refers to this film as the second of a trilogy of movies, including Time Bandits (1981) and The Adventures of Baron Munchausen (1989). He notes that the three films share a related theme of the struggle for imagination and free thinking in a world constantly suppressing such ideas. The story incorporates references to the final episode of The Prisoner, a UK TV series from 1967.

The plot has some awkward points, the most notable being the instant hate-to-love transition made by the female lead for the hero Sam.

Cinematically, the film has been viewed as a dark parody of science fiction adventure films (the film has been specifically referred to as lampooning Star Wars, but the same sentiment could also apply to similar themed works that came after, such as The Matrix). Such films often feature a reluctant, ordinary citizen being transformed into a hero against a faceless, omnipresent dictatorship. Brazil lampoons many features of the genre.

Some of the film's core ideas are open to interpretation. Where exactly does Sam slip from reality into fantasy? Do terrorists actually exist, or is it simply the MOI staging bombings to give reason for its existence? Analysts from the political left also raise the question whether parallels are meant to be made between the world of Brazil and either the societies of the United Kingdom under Prime Minister Margaret Thatcher (1979–1990) or the United States under President Ronald Reagan (1981–1989) both contemporary to the film's production, while analysts from the political right draw parallels between Brazil's government bureaucracy with communism, social-democracy and socialism, in analogy to George Orwell's novel Nineteen Eighty-Four. The movie can thus be interpreted from a civil libertarian perspective from either the political left or right. Given Gilliam's own experiences in the film industry, Brazil could conceivably be interpreted as a critique of institutional Hollywood, as well.

There is a distinct tone of general bad luck, as demonstrated in a perverse version of what may be considered the Butterfly effect. The machinery of Brazil has no personality and exceedingly poor quality control, leading to a world where everything routinely breaks down even as the human beings duke it out in the middle. At the beginning of the movie, a scientist kills a large bug, which falls into a teletype machine, causing it to malfunction. This causes one of its printouts to read "Buttle" instead of "Tuttle", and it is Buttle who is taken off, tortured and killed. The hero's attempts to save his love only culminate in her death, and ultimately his resistance to the state's all-powerful authority only leads to his own ruination.

One overall interpretation is that a bureaucracy is a ruthless tyranny, psychopathic and without moral or feeling to the people it claims to serve. The government's troops are portrayed as regular Joes whose deaths at the hands of the hero are as much murder as the deaths of their own victims. The government is not made up of malevolent minions, but merely ordinary men and women who are only doing their jobs, oblivious to the resulting suffering. There is a hint that the world of Brazil is run by its thugs - the Black Maria's of the under-story below the MOI. The propaganda posters of the film are also a hint of the social forces being invoked. A notable feature of the film's environment is the ducts (pipes). They are everywhere - running through people's homes (technology in the service of technology); They are almost alive in the biologically convoluted and as complicated air-con of Sam's house (for instance when the rogue Tuttle makes his entrance for an illegal repair). More interestingly - where do they go? There appear to be none whatsoever in the MOI - because that is where they end.

As with Blade Runner, a version of the film was created by the movie studio with a more consumer-friendly "happy ending".

Gilliam's original cut of the film ended on a dark note: the protagonist's improbable defeat of the Ministry of Information, followed by his escape to the countryside with his lover, is abruptly revealed to be nothing more than a hallucination. In reality, Lowry has gone insane from his torture at the hands of the Ministry, and his dream of escape is nothing more than a flight into fantasy within his shattered mind.

Universal Studios executives thought the ending tested poorly, and wanted Gilliam to cut out the final reveal, and simply show Sam and Jill escaping to a life in the countryside, creating the so-called "love conquers all" ending. This version of the film was eventually shown on American television, much to Gilliam's consternation.

The movie, a production of producer Arnon Milchan's company Embassy International Pictures (not to be confused with Joseph E. Levine's Embassy Pictures), was released internationally outside of the U.S. by 20th Century Fox in Gilliam's original 142-minute version, while Universal handled U.S. distribution. Universal chairman Sid Sheinberg and Gilliam disagreed over the film; Sheinberg insisted on dramatically re-editing the film to give it a happy ending, which Gilliam resisted vigorously.

The movie was shelved by Universal as the argument continued, but Brazil, though still unreleased, was awarded the Los Angeles Film Critics Association award for "Best Picture". Gilliam took out a full-page ad in the trade magazine Variety saying only, "Dear Sid Sheinberg, When are you going to release my film 'Brazil'?" Two weeks after the award, Universal was shamed into releasing a modified 131-minute version supervised by Gilliam, in 1985.

Upon release, Brazil performed poorly at the box office. Audiences were confused. Nonetheless, the film remains a cult favourite, particularly among Gilliam's fans. In tone and setting, it has similarities to Gilliam's later reality-twisting Twelve Monkeys, and the controversy about the film's ending is reminiscent of Blade Runner.

The 131-minute U.S. version was released on VHS and LaserDisc. The original European cut is currently available on DVD.

Sheinberg's edit, the so-called "love conquers all" version, was shown on syndicated television, and is available as an extra on the Criterion Collection DVD release of the film.

In 2004 the magazine Total Film named Brazil the 20th greatest British movie of all time.

In 2005 TIME magazine's film reviewers, Richard Corliss and Richard Schikel named Brazil in an unranked list of the 100 best films of all time.

Retrieved from "https://movies.fandom.com/wiki/Brazil?oldid=119281"
Community content is available under CC-BY-SA unless otherwise noted.