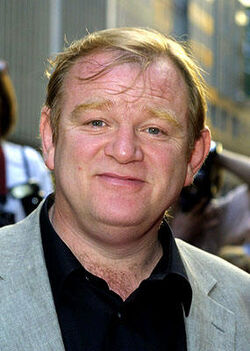 Brendan Gleeson (29 March 1955) is a well respected actor from Dublin, Ireland. He has appeared in many notable films, including Braveheart, Gangs of New York, In Bruges, and the Harry Potter series as Professor Mad-Eye Moody.

Despite having won many acting accolades, Brendan Gleeson has never been nominated for an Academy Award.