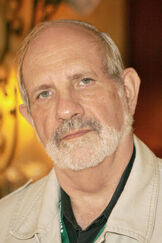 Brian De Palma (born September 11, 1940) is an American film director. In a career spanning over forty years, he is probably best known for his suspense and thriller films, including such box office successes as Carrie, Carlito's Way, Dressed to Kill, Scarface (1983), The Untouchables, and Mission: Impossible.

De Palma is often cited as a leading member of the New Hollywood generation of film directors, a distinct pedigree who either emerged from film schools or are overtly cine-literate. His contemporaries include Martin Scorsese, Paul Schrader, John Milius, George Lucas, Francis Ford Coppola, and Steven Spielberg.

De Palma's artistry in directing and use of cinematography and suspense in several of his films is often compared to the work of Alfred Hitchcock.

De Palma has encouraged and fostered the filmmaking careers of directors such as Mark Romanek and Keith Gordon. Terrence Malick credits seeing De Palma's early films on college campus tours as a validation of independent film, and subsequently switched his attention from philosophy to filmmaking.