watch 02:03
Wiki Targeted (Entertainment)
Do you like this video?
Play Sound
Bridesmaids 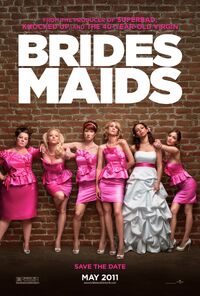 Bridesmaids is a 2011 American romantic comedy film directed by Paul Feig, written by Annie Mumolo and Kristen Wiig, and produced by Judd Apatow, Barry Mendel, and Clayton Townsend. The plot centers on Annie (Wiig), who suffers a series of misfortunes after being asked to serve as maid of honor for her best friend, Lillian, played by Maya Rudolph. Rose Byrne, Melissa McCarthy, Ellie Kemper, and Wendi McLendon-Covey costar as Annie's fellow bridesmaids, with Chris O'Dowd, Jon Hamm, and Jill Clayburgh (in her last film appearance), playing key supporting roles. Actresses Mumolo and Wiig crafted the screenplay after the latter's casting in producer Apatow's comedy film Knocked Up (2007). Budgeted at $32.5 million, filming took place in Los Angeles, California. Upon its opening release in the United States and Canada on May 13, 2011, Bridesmaids was both critically and commercially successful. The film grossed $26 million in its opening weekend, eventually grossing over $288 million worldwide, and surpassed Knocked Up to become the top-grossing Apatow production to date. It received a 90% overall approval rating according to Rotten Tomatoes and served as a touchstone for discussion about women in comedy.

Annie Walker (Kristen Wiig) is a single woman in her late 30s. Following the failure of her bakery, she lost her boyfriend and her savings, reducing her career to a sales clerk at a jewelry store and forcing her to share an apartment with an obnoxious roommate and his sister. Her business's failure was so painful that she has given up baking entirely. She has a no-strings-attached sexual relationship with the self-absorbed Ted (Jon Hamm) but hopes for something more from him. Her best friend Lillian Donovan (Maya Rudolph) is virtually her only source of happiness.

Lillian becomes engaged and asks Annie to be her maid of honor. At the engagement party, Annie meets her fellow bridesmaids: Lillian's cynical cousin Rita (Wendi McLendon-Covey); idealistic friend Becca (Ellie Kemper); raunchy future sister-in-law Megan (Melissa McCarthy); and Helen Harris III (Rose Byrne), the beautiful but over-the-top wife of Lillian's fiancé's boss. Helen and Annie, who are both jealous of the other's friendship with Lillian, take an instant, strong, dislike to each other, but Lillian persuades them to spend time together.

Annie takes Lillian and the bridesmaids to a Brazilian steak restaurant for lunch before going to a chic bridal shop. However, Helen must use her influence to gain access to the shop when Annie neglects to make a reservation. While trying on gowns, the whole party—with the exception of Helen, who did not eat food at the restaurant—becomes sick from food poisoning, ruining their afternoon. Later, Annie's suggestion of a bachelorette party at Lillian's parents' lake house is overruled in favor of a trip to Las Vegas planned by Helen. Worried about her finances and too proud to accept a ticket paid for by Helen, Annie books a ticket in coach while the rest of the party flies first class. However, the trip is cut short due to an outburst from Annie, who due to her fear of flying had accepted a sedative from Helen. The scene on board the plane forces an emergency landing in Casper, Wyoming, following which the party takes a bus back home. Annie apologizes but Lillian tells Annie she wants Helen to take over planning the shower and wedding, as "she does this sort of thing all the time" and to take some pressure off Annie's shoulders.

Annie continues to hope for a relationship with Ted, but begins flirting with Officer Nathan Rhodes (Chris O'Dowd), a friendly state patrolman who earlier had let her off without a ticket for broken tail lights. Nathan encourages her to open a new bakery, but Annie refuses. Following a night together, the next morning Nathan buys baking supplies with which he suggests Annie make them breakfast. Offended and overwhelmed, Annie leaves. Annie is later fired from her job for calling a rude teenage customer "a little cunt" and—kicked out of her apartment by her odd British roommate and his sister—moves in with her mother.

Annie travels to Chicago for the bridal shower at Helen's home, which has been transformed into a Paris-themed event. Helen then upstages Annie's heartfelt, handmade shower gift by giving Lillian a trip to Paris, an idea Annie expressed earlier, which Helen stole. Enraged that Helen has taken credit for the Parisian theme, Annie throws a temper tantrum. She is kicked out of the shower and the wedding. On her way home, Annie is involved in a car accident, but the other driver flees the scene. Nathan happens to be the attending officer, and he admonishes her for not fixing her tail lights and taking responsibility for her life. He storms off when Ted arrives to give Annie a ride. When he asks her to perform oral sex on him on the way home, she breaks off the relationship and walks home.

Throughout the next several days Annie becomes reclusive, refusing to leave her mother's house and watching television obsessively. After a pep talk from Megan, Annie realizes her errors and tries to make amends with Nathan, but he ignores her. On the day of the wedding, Helen appears at Annie's doorstep distraught; Lillian has disappeared, and Helen begs for Annie's help in finding her. Helen and Annie have a reconciliation of sorts, and Helen apologizes to Annie. The two enlist Nathan to help, and he grudgingly agrees. The group find Lillian at her own apartment, discovering that she ran from her wedding due to Helen's extravagant planning for the wedding and fear of leaving her life in Milwaukee. After reconciling, Annie helps Lillian prepare for her wedding.

Annie resumes her place as maid of honor at the wedding. After the wedding, which Annie agrees with Helen is "perfect," Helen again apologizes to Annie and states her hope that they can be friends in the future. Realizing that Annie and Nathan were falling in love, Helen had also arranged for him to pick Annie up after the wedding. Nathan and Annie reconcile and ride away in his patrol car.

Bridesmaids Official Trailer 1 - (2011) HD
Add a photo to this gallery
Retrieved from "https://movies.fandom.com/wiki/Bridesmaids?oldid=273159"
Community content is available under CC-BY-SA unless otherwise noted.