watch 01:28
The Loop (Movies)
Do you like this video?
Bumblebee 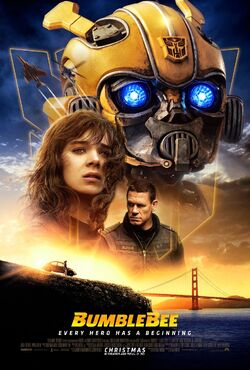 Bumblebee premiered in Berlin on December 3, 2018, and was released in the United States on December 21, 2018, in 2D, Real D 3D, and Dolby Cinema. The film received critical acclaim from critics, who praised the action, editing, cinematography and Steinfeld's performance, as well as the 1980s setting and sense of nostalgia, with some calling it the best installment of the Transformers franchise.

On Cybertron, the Autobots, led by Optimus Prime, are on the verge of losing the Transformer civil war to enemies, the Decepticons, and begin making preparations to leave the planet. The Decepticons ambush them during the evacuation, and Optimus sends a young scout, B-127, to Earth in order to set up a base of operations where the Autobots can regroup. B-127 reaches Earth alone in 1987, crash-landing in California and disrupting a training exercise being conducted by Sector 7, a secret government agency that monitors extraterrestrial activity on Earth. Sector 7 lieutenant Jack Burns presumes B-127 to be a hostile invader and attacks, driving B-127 into the forest, where he is then ambushed by the Decepticon Blitzwing. When B-127 refuses to disclose Optimus's whereabouts, Blitzwing spitefully tears out his voicebox and damages his memory core. B-127 manages to destroy Blitzwing before collapsing from his wounds. Before entering stasis, B-127 scans and transforms into a nearby 1967 Volkswagen Beetle.

Charlie Watson, a teenage outcast traumatized by the death of her father and resentful of her mother Sally for remarrying, finds B-127 in his Beetle form in a scrapyard belonging to her friend Hank, who gives it to her as a birthday present, on the condition that Charlie repairs it. In doing so, Charlie accidentally activates a homing signal that is detected in space by Decepticons Shatter and Dropkick, just as they are in the middle of interrogating the captive Autobot Cliffjumper. After executing Cliffjumper, the pair head to Earth, where they masquerade as peacekeepers to persuade Sector 7 to help them find and capture B-127, whom they claim is a dangerous criminal.

Meanwhile, Charlie revives and befriends the amnesiac B-127, whom she nicknames “Bumblebee” and teaches how to communicate through his radio. Together, they unlock a message from Optimus urging Bumblebee to defend Earth in their absence, which restores his memories. Bumblebee is discovered by Charlie's neighbor Memo, who agrees to protect their secret due to his feelings for Charlie. Left alone, Bumblebee accidentally destroys Charlie’s living room and causes an energy spike that attracts Sector 7’s attention. When Sally blames Charlie for the destruction, Charlie angrily leaves with Bumblebee and Memo, only for the group be intercepted by Sector 7, Shatter and Dropkick. Bumblebee is captured while Charlie and Memo are returned home. Charlie finally expresses her pain over her father’s death and makes amends with her mother, who helps Charlie follow Burns to the Sector 7 outpost where Bumblebee is being held. Shatter and Dropkick torture Bumblebee into revealing the Autobots’ whereabouts and leave him for dead after revealing their plan to bring the Decepticons to Earth. After Charlie revives Bumblebee with one of Sector 7’s high voltage guns, the pair set out to prevent Shatter and Dropkick from contacting the Decepticons with a beacon. Burns and his men also attempt to stop Shatter and Dropkick, but Dropkick destroys their helicopter, although Bumblebee saves Burns.

Bumblebee kills Dropkick and Charlie deactivates the Decepticon beacon, causing an enraged Shatter to pursue her. Bumblebee causes a flood, crushing Shatter under the rubble, before being rescued by Charlie. Realizing that he had been wrong about Bumblebee, Burns buys them time to escape before the army arrives. Charlie, realizing that Bumblebee has a greater purpose on Earth, tearfully parts ways with him. After saying goodbye, Bumblebee scans a 1977 Chevrolet Camaro and drives away. Charlie returns to her family while Bumblebee meets up with Optimus Prime, who is disguised as a a red 1977 Freightliner semi truck, as more Transformers arrive on Earth.

On February 12, 2016, it was announced that the sixth film in the Transformers series Transformers 6 would be released on June 8, 2018, while later it was revealed that the film would be an untitled spin-off, featuring Bumblebee. On November 11, 2016, Deadline reported that Paramount Pictures was moving forward with the project by revealing that Christina Hodson had written the script for the spin-off, and she was one of the female writers Paramount and Michael Bay hired in the "writers room." On March 2, 2017, Deadline reported that Travis Knight was hired to direct the film. In May 2017, it was revealed that the film's story would be set in the 1980s, and that it would have fewer robots. In the same month, it was announced that it would be titled as Transformers Universe: Bumblebee.

In May 2017, it was reported that Hailee Steinfeld was in talks for the female lead in the film, and she confirmed her involvement later in June. On July 11, 2017, Jorge Lendeborg Jr. joined the cast as the male lead. On July 12, 2017, The Tracking Board confirmed that Rachel Crow had been cast in the film. On July 13, 2017, the rest of the core cast of the film was confirmed, including Jason Drucker, Abby Quinn, Ricardo Hoyos and Gracie Dzienny. On July 22, 2017, it was reported that Pamela Adlon had been cast in the film to play Steinfeld's mother. On July 31, 2017, the film added John Cena to its lead cast along with Kenneth Choi and Stephen Schneider in the supporting cast. On October 2, 2017, while interviewing in promotion for the home media release of Transformers: The Last Knight, Peter Cullen revealed he will be in the film. On December 11, 2017, it was revealed that actor Martin Short has joined the film's voice work. On May 31, 2018, Jess Harnell revealed he will be reprising his role as the voice of Barricade from the 2007 film and The Last Knight. On July 13, 2018, it was announced that Angela Bassett and Justin Theroux would be voicing a pair of Decepticons respectively called Shatter and Dropkick. On August 26, 2018, voice actor David Sobolov, who had voiced Depthcharge in Beast Wars: Transformers, Brawl in the 2007 video game and Shockwave in Transformers: Prime confirmed he will voice Blitzwing.

Principal photography on the film began on July 31, 2017, in Los Angeles, San Francisco, Vallejo, and Mare Island, California, and was scheduled to finish on November 16, 2017, under the working title Brighton Falls. Filming concluded 6 days ahead of schedule on November 10, 2017.

Later, in November 2017, the film was revealed to have changed its title to Bumblebee: The Movie, as well as having wrapped up filming.

Dario Marianelli is set to provide the music score for the film, making this the first time Steve Jablonsky has not scored one of the films in the franchise.

Visual effects for the film will be provided by Industrial Light & Magic, Cantina Creative, and The Third Floor with Jason Smith and Tony Lupoi serving as the main visual effects supervisors.

On November 21, 2018, Paramount announced it would hold one-day previews for the film on Saturday, December 8, 2018, similar to the promotion Amazon Prime and Sony Pictures run with films like Jumanji: Welcome to the Jungle, Hotel Transylvania 3: Summer Vacation, and fellow December 2018 release Aquaman.

In the United States and Canada, Bumblebee will be released alongside Aquaman, Welcome to Marwen, and Second Act, and is projected to gross around $40 million over its five-day opening weekend.

On review aggregator website Rotten Tomatoes, the film holds an approval rating of 96% based on 25 reviews, with an average rating of 7.4/10. On Metacritic, the film has a weighted average score of 73 out of 100, based on 12 critics, indicating "generally favorable reviews".

Liz Shannon Miller of IndieWire gave the film a "B+" and wrote, "...there are many scenes where giant robots fight each other, and in those scenes, you can actually see what's happening. The Autobots and Decepticons toss each other around with slick judo-like moves and blast each other with abandon, and the cinematography and editing hold still long enough to let you enjoy each moment." Peter Debruge of Variety called the film a "quieter, more character-driven Transformers origin story" and wrote that "Bumblebee is basically the movie that fans of the 1980s animated series wanted all along."

Retrieved from "https://movies.fandom.com/wiki/Bumblebee?oldid=222290"
Community content is available under CC-BY-SA unless otherwise noted.