Moviepedia
Register
Don't have an account?
Sign In
Advertisement
in: 1907 births, 1997 deaths, Male actors from Cleveland, Ohio,
and 9 more 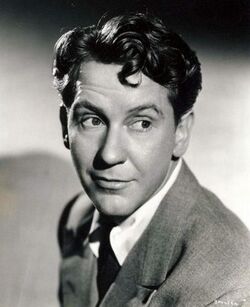 Oliver Burgess Meredith (November 16, 1907 – September 9, 1997), known professionally as Burgess Meredith, was an American actor, director, producer, and writer in theater, film, and television. He won several Emmys, was the first male actor to win the Saturn Award for Best Supporting Actor twice, and was nominated for two Academy Award.

He established himself as a leading man in Hollywood with critically acclaimed performances as George Milton in Of Mice and Men (1939), Ernie Pyle in The Story of G.I. Joe (1945), and the narrator of A Walk in the Sun (1945).

Meredith was known later in his career for his appearances on The Twilight Zone and for portraying arch-villain The Penguin on the 1960s TV series Batman and boxing trainer Mickey Goldmill in the Rocky film series. For his performances in The Day of the Locust (1975) and Rocky (1976), he received nominations for the Academy Award for Best Supporting Actor. He later starred in the comedy Foul Play (1978) and the fantasy film Clash of the Titans (1981). He narrated numerous films and documentaries during his long career, including Twilight Zone: The Movie (1983).

"Although those performances renewed his popularity," observed Mel Gussow in The New York Times, "they represented only a small part of a richly varied career in which he played many of the more demanding roles in classical and contemporary theater—in plays by Shakespeare, O'Neill, Beckett and others."

Meredith was born in 1907 in Cleveland, Ohio, the son of Ida Beth (née Burgess) and Dr. William George Meredith a Canadian-born physician, of English descent. His mother came from a long line of Methodist revivalists, a religion to which he adhered throughout his lifetime.

Meredith graduated from Hoosac School in 1926 and then attended Amherst College (class of 1931). He left Amherst, and became a reporter for the Stamford Advocate. In 1942, he enlisted in the United States Army Air Forces during World War II, reaching the rank of captain. After transferring to the Office of War Information, he made training and education films for America's armed forces. In 1943 he performed in the USAAF's recruiting short The Rear Gunner and the U.S. Army training film A Welcome to Britain for troops heading to the UK in preparation for the liberation of Europe. He was released from duty in 1944 to work on the movie The Story of G.I. Joe, in which he played the war correspondent Ernie Pyle. He was discharged from the USAAF in 1945.