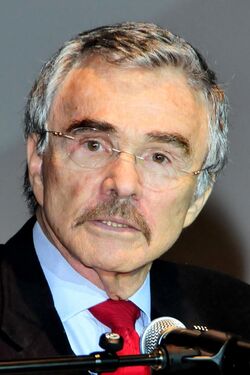 Burt Leon Reynolds Jr. (February 11, 1936 – September 6, 2018) was an Oscar-nominated American actor. He may be best remembered for film such as Deliverance, The Longest Yard (1974) and the "Bandit" in Smokey and the Bandit.

Reynolds was born in Lansing, Michigan to Burton Leon Reynolds, a police chief of half-Cherokee Indian and half-Irish descent, and Fern, who was of English descent. After graduating from Palm Beach High School in West Palm Beach, Florida, Reynolds attended Florida State University on a college football scholarship, becoming an all-star Southern Conference halfback. While at Florida State, Reynolds joined the Phi Delta Theta Fraternity, the football team's fraternity of choice. After a knee injury in 1955 and then a debilitating car accident, Reynolds came home to Riviera Beach to recuperate. In order to keep up with his studies he began taking classes at Palm Beach Junior College (now known as Palm Beach Community College) in neighboring Lake Worth. While there, he met an English Professor named Watson B. Duncan III, who enrolled him in the concept of a career in acting. Reynolds calls Duncan his mentor and the most-influential person in his life. When he returned to Florida State, he switched from athletics to college drama and won the 1956 Florida State Drama Award. He was drafted by the Baltimore Colts National Football League team, but he never played professional football.

Reynolds won a scholarship to the Hyde Park Playhouse and moved to upstate New York. He did gigs as a stuntman for television programs until he was "discovered" in a revival of Mister Roberts in New York City and signed to a television acting contract. He made his Broadway debut in Look, We've Come Through. Reynolds first starred on television, in the 1950s series Riverboat and went on to appear in a number of other shows, including a role as blacksmith Quint Asper on Gunsmoke from 1962 to 1965.

His film debut was in 1961, in the movie Angel Baby. At the urging of friend Clint Eastwood, Reynolds used his TV fame to secure leading roles in overseas low budget films commonly called Spaghetti Westerns beginning with Navajo Joe in 1966. These low budget starring roles established Reynolds as a bankable leading man in film and earned him starring roles in U.S. big budget motion pictures. His breakout performance in Deliverance (1972) made him a star.

Reynolds gained additional notoriety in 1972 when he posed in the April (Vol. 172, No. 4) issue of Cosmopolitan Magazine. It is said to be the first American magazine centerfold of a (near) nude male. In the 1980s, after Smokey and the Bandit, he became typecast in similar, less well-done and less successful movies. Comedian/actor Robert Wuhl, in a standup act in the late 80s, said that "Burt Reynolds makes so many bad movies, when someone else makes a bad movie Burt gets a royalty!" Reynolds has directed a few movies, the best-known being Sharky's Machine, released in 1981.

During the first half of the 1990s, he was the star of the CBS television series Evening Shade, for which he won an Emmy Award for Outstanding Lead Actor in a Comedy Series (1991). The bad press from his divorce caused Reynolds' already slowing career to nosedive and he had to declare bankruptcy in late 1996. Reynolds started a comeback with the movie Striptease (1996), and the critically acclaimed Boogie Nights (1997) put his career back on track. In early 2000, he created and toured Burt Reynolds' One Man Show. Many fans were astonished in 2003 to see photographs showing the unusual results of extensive plastic surgery on Reynolds (see [1]). In 1997, Reynolds was nominated for an Academy Award for Best Supporting Actor for his performance in Boogie Nights and won a Golden Globe Award for the movie. He was considered a front-runner for the Supporting Oscar, but was pipped at the post by Robin Williams.

In 2005, he co-starred in two remakes: the first one released was of the hit 1980's TV series The Dukes of Hazzard (as Boss Hogg). The second was of his The Longest Yard this time with Adam Sandler playing the role of Paul Crewe, the role Reynolds had played in the 1974 original. This time around, Reynolds took on the role of Nate Scarborough.

Reynolds has a star on the Hollywood Walk of Fame. He starred in the audio book version of The Worst Case Scenario Handbook. In May 2006, Reynolds began appearing in Miller Lite beer commercials.

Template:Unsourced Reynolds is well known for his romances with Dinah Shore, Sally Field, Brenda Vaccaro, Susan Clark and Adrienne Barbeau among others. Reynolds was married to actress/comedienne Judy Carne from 1963–1965, and actress Loni Anderson from 1988 - 1993. The divorce from Anderson became a highly publicized, bitter feud. He was also involved with Swedish-American actress Inger Stevens shortly before her suicide, and to date has refused to comment publicly about the relationship. He once stated in an interview that both he and adopted son Quintin are 1/4 Cherokee. Also in the 1970s he dated Dinah Shore and Tammy Wynette

His autobiography, titled My Life, was published in 1994.

Reynolds reportedly died of cardiac arrest at a Florida hospital on September 6, 2018. He had been suffering from heart problems for a number of years.