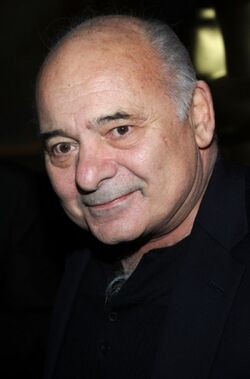 Gerald Tommaso DeLouise (born April 30, 1940), better known by his stage name Burt Young, is an American actor, painter and author. He is best known for portraying Paulie Pennino in Rocky and its sequels.

Young was born in Queens, New York, the son of Josephine and Michael, a high school shop teacher. He is of Italian descent. Young received his dramatic arts training under legendary acting coach Lee Strasberg at the Actors Studio.

Young is known for portraying a rough working class Italian-American characters. He began appearing in films portraying thug roles such as The Gang That Couldn't Shoot Straight, Across 110th Street, Chinatown (1974) and The Gambler (1974). He soon played a larger noticeable role for playing Paulie Pennino in Rocky and its sequels Rocky II, Rocky III, Rocky IV, Rocky V and Rocky Balboa.