Start a Wiki
watch 01:48
The Loop (Movies)
Do you like this video?
Caché (Hidden) 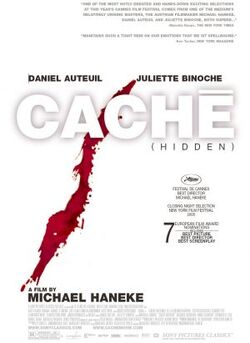 Caché (Hidden) is a 2005 Austrian-French film written and directed by Michael Haneke. It stars Daniel Auteuil as Georges and Juliette Binoche as his wife Anne.

The quiet life of a Paris family is disturbed when they receive a series of surveillance tapes of their own residence from an anonymous source. Georges Laurent (Daniel Auteuil) is the successful host of a French literary TV programme, living with his wife Anne (Juliette Binoche), a book publisher, and their school-age son Pierrot (Lester Makedonsky). Unmarked videocassettes arrive on their doorstep, tapes that show extended observation of their home's exterior from a static street camera that is never noticed. At first passive and harmless, but later accompanied by crude, disturbing crayon drawings, the tapes lead to questions about Georges' early life that disrupt both his work and marriage. Caché won Best Director at the Cannes Film Festival, Best Director, Actor and Film from the European Film Awards and Best Foreign Language Film from the Los Angeles Film Critics Association.

Retrieved from "https://movies.fandom.com/wiki/Cach%C3%A9?oldid=28150"
Community content is available under CC-BY-SA unless otherwise noted.