Start a Wiki
watch 01:27
The Loop (Movies)
Do you like this video?
Captain America: The First Avenger 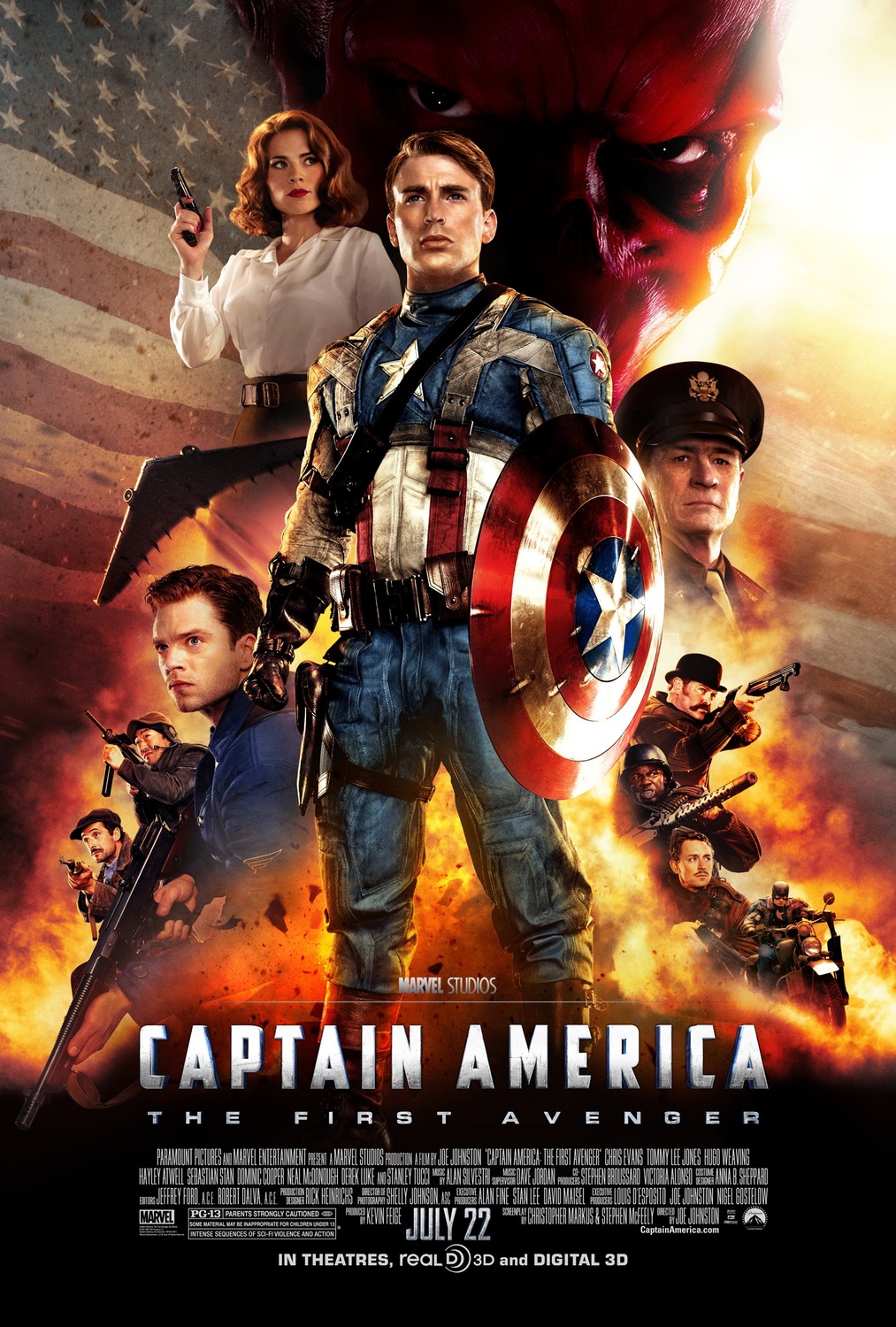 Captain America: The First Avenger is a 2011 superhero film based on the Marvel comics superhero Captain America and the fifth film in the Marvel Cinematic Universe. It is directed by Joe Johnston and stars Chris Evans as Steve Rogers, Hugo Weaving as Red Skull, Hayley Atwell as Rogers' love interest Peggy Carter and Sebastian Stan as Bucky Barnes. The film is the final prelude to the crossover film The Avengers.

The film received positive reviews, with reviewers commending the visuals, story and the performances of the cast (particulary that of Evans and Weaving) and the film was a box office success, grossing over $370 worldwide.

In the present day, scientists in the Arctic uncover a mysterious object with a red, white and blue motif. In March 1942, Nazi officer Johann Schmidt and his men invade a castle in Tønsberg, Norway, to steal a mysterious Tesseract which Schmidt calls "the jewel of Odin's treasure room." In New York City, Brooklyn native Steve Rogers is rejected for World War II military duty as 4F for the fifth time. Rogers' friend, Sgt. James "Bucky" Barnes, takes Rogers to the Modern Marvels of Tomorrow exhibition, where Rogers slips into a recruitment center for another attempt at enlisting. When Barnes attempts to dissuade him, Rogers' fervent conviction about serving his country catches the ear of expatriate Bavarian scientist Dr. Abraham Erskine (Stanley Tucci), who is with the U.S. government's Strategic Scientific Reserve. He recruits Rogers to a squad of soldiers at Camp Lehigh in New York state. There, under Colonel Chester Phillips and SSR officer Peggy Carter, one will be chosen as the first in a "super-soldier" experiment. Phillips suggests Gilmore Hodge, but an act of a self-sacrificing bravery by Rogers convinces Erskine to use Rogers. In Europe, Schmidt and scientist Arnim Zola attempt to harness the power of the cube-like Tesseract.

In a secret lab behind a Brooklyn antique store, Erskine and others gather with Senator Brandt and U.S. State Department employee Fred Clemson as Rogers is given micro-injections of serum and then doused with what Erskine calls "vita-rays". Rogers emerges from a chamber tall and muscular — and his abilities are put to the test immediately when Clemson is exposed as assassin Heinz Kruger who kills Erskine. Rogers pursues Kruger in his car, but the spy flees to his submarine after Carter kills the driver. Rogers captures Kruger, but the spy commits suicide with a cyanide capsule.

With the experiment dead, Brandt has Rogers don a colorful costume for a gaudy War Bonds promotional stage show that leads to one unimpressed soldier audience in Italy, November 1943, jeering Rogers. When he hears Barnes is among a number of soldiers captured by Schmidt, also known as the Red Skull, Rogers convinces Carter and Stark to fly him behind enemy lines for a solo rescue mission. Breaking into what turns out to be a base for the Skull's private terrorist group, HYDRA, he frees Barnes and the others, memorizes a map of HYDRA bases, and briefly confronts the Skull — Erskine's first super-soldier before the scientist's escape. The Skull takes off his mask revealing his bleached red skin, saying that he wasn't a failure, but a success. The Skull and Zola retreat, and Rogers returns the men to base, along with high-tech guns that use Tesseract energy.

To destroy HYDRA's bases, Rogers recruits a team consisting of Barnes, Timothy "Dum Dum" Dugan, and Gabe Jones, Jim Morita, James Falsworth, and Jacques Dernier. Adopting a circular shield made of a substance Stark calls vibranium, which absorbs vibrations, Rogers and his squad take out all but one base. Finally, Rogers and Barnes zip line onto a train transporting Zola; during the ensuing battle, Barnes seemingly falls to his death in a gorge.

Rogers, using information Phillips has gleaned from Zola in his interrogation, leads the commandos to the Skull's final redoubt. Rogers scrambles onto the Skull's jet as it takes off on a mission to obliterate the U.S. using the Tesseract energy, and eventually confronts the Skull. The Skull attempts to use the Tesseract but instead opens a portal into space, and disintegrates into light that shoots away, possibly towards Asgard (as the Tesseract is of Asgardian origin). The Tesseract melts through the plane and falls to Earth. Rogers, as Carter listens on radio, crashes the plane into the ocean to prevent it from reaching the United States. Shortly after, the Allies celebrate V-E Day. Carter, Stark, and Phillips manage to recover the Tesseract, but are unable to locate Rogers.

In the present-day, Rogers awakens in a room designed to appear as if he were still in the 1940s. Whilst being surrounded by security, he manages to escape by delievering a forceful bust through the wall, leaving two S.H.I.E.L.D. agents in critical condition. Escaping to Times Square, Rogers learns from S.H.I.E.L.D. leader Nick Fury that he has been asleep for nearly 70 years, and they had wanted to acclimate his reentry into modern times. Rogers' only response is that he is late for a dance he had promised to Carter almost 70 years ago.

In a post-credits scene, Rogers angrily hits a punching bag before being approached by Fury, who assigns him to save the world.

Continuity and References to the Marvel Cinematic Universe

The film received critical acclaim, with a rating of 79% on Rotten Tomatoes.

Retrieved from "https://movies.fandom.com/wiki/Captain_America:_The_First_Avenger?oldid=175421"
Community content is available under CC-BY-SA unless otherwise noted.