Start a Wiki
watch 01:27
The Loop (Movies)
Do you like this video?
Captain America: The Winter Soldier 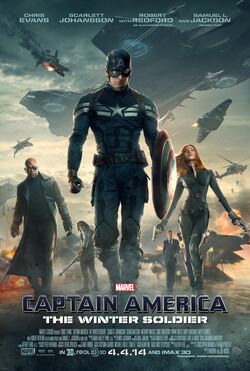 It is also the ninth instalment in the Marvel Cinematic Universe and is the highest grossing film in the Captain America franchise, grossing over $714 million. The film became a critical and commercial success. At the 87th Academy Awards, the film was nominated for Best Achievement in Visual Effects.

A sequel, Captain America: Civil War, was released in 2016.

Two years after the Battle of New York, Steve Rogers works in Washington D.C. for the espionage agency S.H.I.E.L.D. under Director Nick Fury, while adjusting to contemporary society. Rogers and Agent Natasha Romanoff are sent with S.H.I.E.L.D.'s counter-terrorism S.T.R.I.K.E. team, led by Agent Rumlow, to free hostages aboard a S.H.I.E.L.D. vessel from Georges Batroc and his mercenaries. Mid-mission, Rogers discovers Romanoff has another agenda: to extract data from the ship's computers for Fury. Rogers returns to the Triskelion, S.H.I.E.L.D.'s headquarters to confront Fury and is briefed about Project Insight: three Helicarriers linked to spy satellites, designed to preemptively eliminate threats. Unable to decrypt the data recovered by Romanoff, Fury becomes suspicious about Insight and asks senior S.H.I.E.L.D. official Alexander Pierce to delay the project.

On his way to rendezvous with Maria Hill, Fury is ambushed by assailants led by a mysterious assassin called the Winter Soldier. Fury escapes to Rogers' apartment, and warns Rogers that S.H.I.E.L.D. is compromised. After handing Rogers a flash drive containing data from the ship, Fury is gunned down by the Winter Soldier. Fury dies in surgery, and Hill recovers the body. The next day, Pierce summons Rogers to the Triskelion. When Rogers withholds Fury's information, Pierce brands him a fugitive. Hunted by S.T.R.I.K.E., Rogers meets with Romanoff. Using data in the flash drive they discover a secret S.H.I.E.L.D. bunker in New Jersey, where they activate a supercomputer containing the preserved consciousness of Arnim Zola. Zola reveals that ever since S.H.I.E.L.D. was founded after World War II, Hydra has secretly operated within its ranks, sowing global chaos with the goal that humanity would willingly surrender its freedom in exchange for security. The pair narrowly escape death when a S.H.I.E.L.D. missile destroys the bunker, and realise that Pierce is Hydra's leader within S.H.I.E.L.D.

Rogers and Romanoff enlist the help of former USAF pararescueman Sam Wilson, whom Rogers befriended, and acquire his powered "Falcon" wingpack. Deducing that S.H.I.E.L.D. agent Jasper Sitwell is a Hydra mole, they force him to divulge that Zola developed a data-mining algorithm that can identify individuals who might become future threats to Hydra's plans. The Insight Helicarriers will sweep the globe, using satellite-guided guns to eliminate these individuals. Rogers, Romanoff, and Wilson are ambushed by the Winter Soldier, who kills Sitwell. During the fight, Rogers recognizes the Winter Soldier as Bucky Barnes, his friend who was captured and experimented upon during WWII. Hill manages to extract the trio to a safehouse where Fury, who had faked his death, is waiting with plans to sabotage the Helicarriers by replacing their controller chips.

After the World Security Council members arrive for the Helicarriers' launch, Rogers broadcasts Hydra's plot to everyone at the Triskelion. Romanoff, disguised as one of the Council members, disarms Pierce. Fury arrives and forces Pierce to unlock S.H.I.E.L.D's database so that Romanoff can leak classified information, exposing Hydra to the public. Following a struggle, Fury shoots Pierce dead. Meanwhile, Rogers and Wilson storm two Helicarriers and replace the controller chips, but the Winter Soldier destroys Wilson's suit and fights Rogers on the third. Rogers fends him off and replaces the final chip, allowing Hill to take control and have the vessels destroy each other. Rogers refuses to fight the Winter Soldier in an attempt to reach his friend, but as the ship collides with the Triskelion, Rogers is thrown out into the Potomac River. The Winter Soldier rescues the unconscious Rogers before disappearing into the woods. With S.H.I.E.L.D. in disarray, Romanoff appears before a Senate subcommittee and Fury, under the cover of his apparent death, heads to Eastern Europe in pursuit of Hydra's remaining cells. Rogers and Wilson decide to find the Winter Soldier, while Rumlow, who was a double agent for Hydra, is hospitalized following the Triskelion's destruction.

In a mid-credits scene, Baron Wolfgang von Strucker, at a Hydra lab, proclaims that the "age of miracles" has begun as scientists examine an energy-filled scepter and two prisoners: one with superhuman speed, the other with telekinetic powers. In a post-credits scene, the Winter Soldier visits a Bucky memorial at the Smithsonian Institution.

Captain America: The Winter Soldier received critical acclaim. On Rotten Tomatoes, The film has a score of 90% based on 295 reviews with an average score of 7.62/10.

Stephen McFeely and Christopher Markus were hired to return to write the script for the sequel. Chris Evans is contracted to reprise his role as Steve Rogers in future installments in the Captain America franchise.[1] [2] In September 2011, Chris Evans said that a sequel may not be released until 2014. In January 2012, Neal McDonough mentioned that a sequel would likely be filmed after the completion of Thor 2, which would likely be before the end of 2012.[3]

In March 2012, it was reported that Marvel has whittled down a field of ten directors to three potential candidates; George Nolfi (The Adjustment Bureau), F. Gary Gray (The Italian Job) and brothers Anthony and Joseph Russo (Community) to helm the sequel.[4] In April 2012, Walt Disney Studios announced that it will release the sequel to Captain America: The First Avenger on April 4, 2014. Disney stated, "The second installment will pick-up where … The Avengers leaves off, as Steve Rogers continues his affiliation with Nick Fury and S.H.I.E.L.D. and struggles to embrace his role in the modern world.[5] Later in April, it was announced that F. Gary Gray was not going to direct. Filming began in April of 2013 in Los Angeles. Additional filming will take place in Cleveland, Ohio and Washington, D.C.[6] 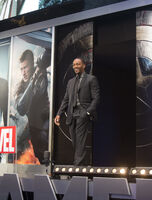 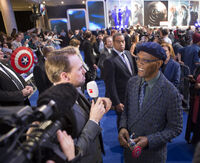 Retrieved from "https://movies.fandom.com/wiki/Captain_America:_The_Winter_Soldier?oldid=215749"
Community content is available under CC-BY-SA unless otherwise noted.