watch 01:20
The Loop (Movies)
Do you like this video?
Captain Marvel 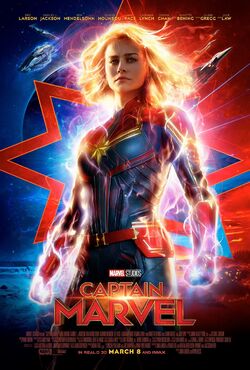 It was released in the United States on March 8, 2019 by Walt Disney Studios Motion Pictures. A sequel, Captain Marvel 2, is currently in development.

In 1995, on the Kree Empire's capital planet of Hala, Starforce member Vers suffers from recurring nightmares involving an older woman. Yon-Rogg, her mentor and commander, trains her to control her abilities while the Supreme Intelligence, an organic artificial intelligence who acts as the ruler of the Kree, urges her to keep her emotions in check.

During a mission to rescue an undercover Kree operative infiltrating a group of Skrulls, alien shapeshifters with whom the Kree have been fighting for centuries, Vers is captured by Skrull commander Talos and forcibly subjected to a memory probe. She manages to escape and inadvertently pilots a pod to Earth, crashing in Los Angeles. Her presence attracts the attention of S.H.I.E.L.D. agents Nick Fury and Phil Coulson, whose investigation is interrupted by a Skrull attack. In the ensuing chase, Vers recovers a crystal containing her extracted memories and Fury kills a Skrull impersonating Coulson. Talos, disguised as S.H.I.E.L.D. Director Keller, convinces Fury to meet and work with Vers.

Using Fury's security clearance, Vers discovers she was a U.S. Air Force pilot who was presumed dead in 1989 after testing an experimental engine designed by a Dr. Wendy Lawson, whom she recognizes as the older woman from her nightmares, and a friend of former pilot Maria Rambeau. The two escape from Talos in a Quinjet, with Lawson's cat Goose stowing away, and fly to New Orleans, Louisiana to meet Rambeau.

A pursuing Talos arrives at the Rambeau house just as Vers discovers her real name is Carol Danvers. He reveals the Skrulls are refugees searching for a new home and Lawson was a Kree renegade helping them. He then plays the recovered black box from Lawson's plane, prompting Danvers to regain her memories and remember the day of the crash: Lawson told her to destroy the engine's energy-core before being killed by Yon-Rogg and she absorbed the energy from the ensuing explosion at the cost of losing all her memories. Talos then leads the group to a cloaked lab ship orbiting Earth, where several Skrulls are hiding and protecting the Tesseract, the source of the energy-core.

Starforce captures Danvers and brings her before the Supreme Intelligence. During their conversation, Danvers removes a Kree implant that was suppressing her powers, gaining full access to all her abilities. A battle then ensues, during which Fury retrieves the Tesseract and Goose, who is revealed to be an alien housing a pocket dimension, consumes it and later scratches his left eye. Danvers destroys ballistic missiles fired by Kree official Ronan the Accuser, forcing him and his forces to retreat. She then overpowers Yon-Rogg on Earth and sends him back to Hala with a warning to the Supreme Intelligence.

Danvers departs to help the Skrulls find a new homeworld, giving Fury a modified pager to contact her in an emergency. Meanwhile, Fury drafts an initiative aimed at locating heroes like her and changes the name after finding a photo of Danvers boarding her Air Force jet, which bears the call sign "Avenger".

In a mid-credits scene set in the present day, Steve Rogers, Natasha Romanoff, Bruce Banner, and James Rhodes are monitoring the pager, which Fury activated prior to his disintegration, when Danvers appears and asks for Fury's whereabouts. In a post-credits scene set in 1995, Goose climbs onto Fury's desk and coughs up the Tesseract on it.

Retrieved from "https://movies.fandom.com/wiki/Captain_Marvel?oldid=245294"
Community content is available under CC-BY-SA unless otherwise noted.