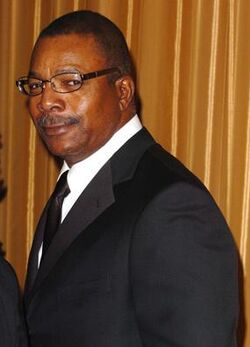 Carl Weathers is an American actor. He is best known for acting in the Rocky series of films, and having a prominent role in the film, Predator.

In the 1970s, Carl Weathers was known for acting in blaxploitation films, specifically the movies Bucktown and Friday Foster. In the Rocky films, he gained critical acclaim for playing Apollo Creed. He also had a major role in Predator in 1987, which he referred to when he guest-starred on Saturday Night Live.

He has also taken on comedy roles satirizing himself, such as when he played himself on the sitcom, Arrested Development.

Retrieved from "https://movies.fandom.com/wiki/Carl_Weathers?oldid=60091"
Community content is available under CC-BY-SA unless otherwise noted.