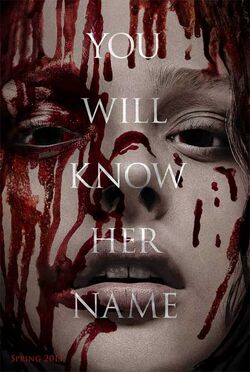 You Will Know Her Name
Directed By
Kimberly Peirce
Produced By
Kevin Misher
Written By
Eli Roth, RZA
Distributed By

Carrie is a supernatural horror film directed by Kimberly Peirce. It is a remake of the 1976 film of the same name. It is the third adaptation of Stephen King's original 1974 novel Carrie and will closely follow the book rather than the original movie. The film is currently scheduled to be released on October 18, 2013.

The plot of Carrie will be similar to the original 1976 film: a young girl with a religious mother and old-fashioned way of life is tormented by bullies at school. Gym teacher Miss Desjardin tries in vain to protect Carrie from the mean girls, who are led by the popular and haughty Chris Hargensen, but only Chris' friend, Sue Snell, regrets her actions.

In an effort to make amends, Sue asks her boyfriend, high school heartthrob Tommy Ross, to take Carrie to the prom. After a cruel prank by her peers at the prom, Carrie is pushed to the limit and unleashes telekinetic havoc upon her classmates and the entire town.

Kimberly Peirce, the director of Stop-Loss and Boys Don't Cry, is slated to direct the MGM/Screen Gems film with a script written by Roberto Aguirre-Sacasa of Glee, Big Love, and Spider-Man: Turn Off the Dark fame.15 year old actress Chloë Moretz, who has played the child assassin Hit Girl in Kick-Ass and the vampire Abby in Let Me In, has been cast as the title role, Carrie White. And Julianne Moore will play Carrie's fanatically religious mother. Portia Doubleday (Youth In Revolt) has also been cast as the girl who started it all Chris Hargenson. Gabriella Wilde has also been chosen to play the role of Sue Snell.

About the new film, Chloë Moretz says, "… We’re kind of going off the book. It’s darker and much more psychological. More ‘Black Swan.’ You’re really looking into her mind and it really looks into the relationship of Margaret and Carrie. It’s set in modern time, so it’s a lot different… It’s something that’s very different from me. It’s an out of body thing. I’m becoming a totally different person for it. I’m letting go of all of my self-esteem issues and just kind of going into it. You have to."

Sony Pictures held a "First Look" event at the New York Comic Con on October 13, 2012. It was followed by a panel session with several members of the cast and crew. The first teaser trailer for the film was released on October 15, 2012.

Moretz on set dressed as Carrie

Retrieved from "https://movies.fandom.com/wiki/Carrie_(2013)?oldid=75383"
Community content is available under CC-BY-SA unless otherwise noted.