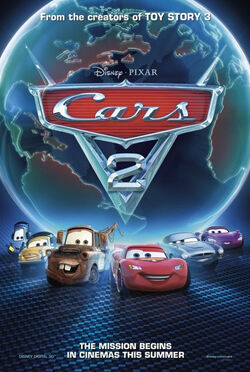 Cars 2 is a 2011 American Computer-animated action comedy spy film produced by Pixar Animation Studios and released by Walt Disney Pictures. The film is the Sequel to the 2006 film Cars. In the film, race car Lightning McQueen (voiced by Owen Wilson) and tow truck Mater (voiced by Larry the Cable Guy) head to Japan and Europe to compete in the World Grand Prix, but Mater becomes sidetracked with international espionage. The film is directed by John Lasseter, co-directed by Brad Lewis, written by Ben Queen, and produced by Denise Ream.

The film was distributed by Walt Disney Pictures and was released in the United States on June 24, 2011 (five years after the first film). The film was presented in Disney Digital 3D and IMAX 3D, as well as traditional two-dimensional and IMAX formats. The film was first announced in 2008, alongside Up, Newt, and Brave (previously known as The Bear and the Bow), and it is the 12th animated film from the studio. The film received mixed reviews from critics, and broke the studio's streak of critical success, but ranked No. 1 on its opening weekend in the U.S. and Canada with $66,135,507 and topping international success of such previous Pixar works as Toy Story, A Bug's Life, Toy Story 2, Monsters, Inc., Cars, and WALL-E.

This plot section is in need of expanding, you can help.


Lightning McQueen and tow truck Mater head to Japan and Europe to compete in the World Grand Prix, but Mater becomes sidetracked with international espionage.  They eventually face off a greedy tycoon and a wicked professor.

Retrieved from "https://movies.fandom.com/wiki/Cars_2?oldid=283499"
Community content is available under CC-BY-SA unless otherwise noted.