Start a Wiki
watch 01:27
The Loop (Movies)
Do you like this video?
Cate Blanchett 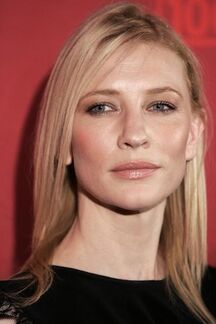 Name
Cate Blanchett
Birthplace
Melbourne, Victoria, Australia
Birth date
May 14, 1969
Occupation
Actress
Notable Films
The Lord of the Rings: The Fellowship of the Ring, The Aviator

She has won multiple acting awards, most notably two SAGs, two Golden Globe Awards, two BAFTAs, and an Academy Award. Blanchett came to international attention for her role as Elizabeth I of England in the 1998 film Elizabeth, directed by Shekhar Kapur. She is also well known for her portrayals of the elf queen Galadriel in Sir Peter Jackson's The Lord of the Rings trilogy and The Hobbit trilogy, Colonel-Doctor Irina Spalko in Indiana Jones and the Kingdom of the Crystal Skull and Katharine Hepburn in Martin Scorsese's The Aviator, a role which brought her an Academy Award for Best Supporting Actress.

Retrieved from "https://movies.fandom.com/wiki/Cate_Blanchett?oldid=178496"
Community content is available under CC-BY-SA unless otherwise noted.