watch 00:59
The Loop (Movies)
Do you like this video?
Chappie 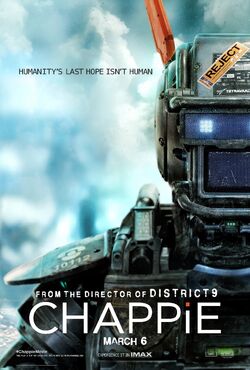 Chappie is an American sci-fi film co-written and directed by Neill Blomkamp, and starring Sharlto Copley, Hugh Jackman, Dev Patel, and Sigourney Weaver, as well "Ninja" and "Yolandi Visser" from the South African rap duo "Die Antwoord." Currently scheduled for released in the U.S. on March 6, 2015, the film is presumably a feature version of Blomkamp's own 2004 short Tetra Vaal, with elements from the 2006 short Tempbot which features a similar-looking robot protagonist. The film premiered in New York City on March 4, 2015 and released in U.S cinemas on March 6, 2015.

In an effort to reduce the high crime rate in Johannesburg, the South African police force purchases armour-plated attack robots from weapons manufacturer Tetravaal, which prove successful in reducing crime. The robot's inventor Deon Wilson is praised for Tetravaal's success, while engineer Vincent Moore grows jealous after funding is cut for his own attack robot, MOOSE, which is derided for its reliance on a human operator. At home, Deon creates a prototype artificial intelligence that mimics a human mind to the point of feeling emotions and having opinions, but Tetravaal CEO Michelle Bradley denies him permission to test the A.I. on a police robot. Undeterred, Deon steals a recently damaged robot before it is destroyed and puts it in his van, along with the "guard key" needed to update the robot's software. On his way home, he is kidnapped by a group of gangsters, Ninja, Yolandi and Yankie, who threaten to kill him unless he reprograms a police robot to fight for them. Deon installs the new software into the damaged robot, which responds with child-like terror upon powering up. Deon and Yolandi calm the robot, teaching it words and naming it "Chappie". Despite Deon wanting to stay with the robot, Ninja forces him out of their hideout.

Ninja's gang only have a few days to pay a debt of 20 million rand to "Hippo", a powerful gangster. Yolandi wants to mother Chappie, but Ninja grows impatient with his development due to both the impending deadline for the debt and Chappie's irreplaceable battery running out, giving him days to live. Ninja tries to train Chappie to be a gangster by leaving him to fend for himself in a dangerous neighbourhood, where he is attacked by a group of thugs and later seized by Vincent, who has found out about Chappie after following Deon to the hideout. Vincent successfully extracts the guard key for his own use, but the traumatised Chappie soon escapes from him and returns to the hideout. Yolandi scolds Ninja for this mistreatment, but he soon manages to persuade Chappie to turn to crime by training him in martial arts and weapon handling. Ninja and Yankie trick Chappie into stealing cars for them, and lie to him about needing the money to replace his dying body.

At Tetravaal, Vincent uses the guard key to upload a virus into every police robot, including Chappie, which shuts them down. Johannesburg's criminals immediately start rioting in the streets, and Deon brings Chappie to the factory to restart him. After he is restarted, Chappie discovers a helmet which controls MOOSE, and re-engineers it to allow him to transfer his consciousness into a computer, so he can change bodies when his current one dies. Ninja's gang use Chappie to raid a police van and steal money, which is caught on the news, but Ninja later confesses that he was lying about there being a new body for Chappie. Enraged, Chappie prepares to kill Ninja, but Deon arrives to warn that Michelle Bradley has ordered for Chappie to be caught and destroyed. At that moment, The MOOSE robot (controlled remotely by Vincent) attacks the hideout and kills Yankie, while Hippo also arrives to collect his debt and fatally shoots Deon. After killing Hippo, Ninja offers to distract MOOSE while Chappie and Yolandi drive Deon to the Tetravaal factory. However, Yolandi gets out of the van and shoots MOOSE before it can kill Ninja. The robot opens fire on her, and Chappie destroys it by detonating a bomb.

Further enraged by Yolandi's death, Chappie drives Deon to the factory, storms into an office and fiercely beats Vincent close to death. He then transfers the dying Deon's conciousness into a spare robot through the modified MOOSE helmet. As Chappie's battery dies, the now robotic Deon wirelessly transfers Chappie's consciousness into one of the many deactivated police robots nearby. The robots go into hiding as the police remove every Tetravaal robot from their forces. The grieving Ninja finds a flash drive marked "Mommy's Consciousness Test Backup", which contains a copy of Yolandi's consciousness. Chappie hacks into Tetravaal's manufacturing facility and build a robot resembling Yolandi, and uploads the consciousness into it.

The review aggregator website Rotten Tomatoes reported a 31% approval rating, based on 135 reviews, with a rating average of 4.8/10. The site's critical consensus reads, "Chappie boasts more of the big ideas and visual panache that director Neill Blomkamp has become known for — and, sadly, more of the narrative shortcomings." On Metacritic, which assigns a normalized rating, the film has a score of 40 out of 100, based on 38 critics, indicating "mixed or average reviews".

Retrieved from "https://movies.fandom.com/wiki/Chappie?oldid=165170"
Community content is available under CC-BY-SA unless otherwise noted.