watch 00:59
The Loop (Movies)
Do you like this video?
Charles Bronson 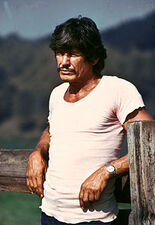 Charles Bronson was an American actor, known for his roles in The Magnificent Seven, The Dirty Dozen, and Once Upon a Time in the West.

Charles Bronson was of Polish-Lithuanian descent and was one of fifteen children of Polish and Lithuanian immigrant parents. As a child, he worked in coal mines. Later on in 1943, he enlisted in the United States Army Air Forces and won a purple heart for being wounded in battle.

Bronson began his acting career in a theater troupe in Philadelphia. In 1954, he changed his last name to Bronson, after being given the advice that his Eastern-European surname, Buchinsky, might cause him to lose roles. He made several television appearances in the 1950s and 1960s, including one on Gunsmoke and The Twilight Zone.

In the 1960s, Bronson began to gain acclaim for his acting. This was mostly due to his role as a gunman in The Magnificent Seven. Later on, he starred in the film, The Great Escape. The 1967 film, The Dirty Dozen was another success for Bronson, where he played a death row inmate sent into the army on a suicide mision. In the late 1960s and early 1970s, he took some roles in European films.

In 1981, Bronson was almost cast in the film Escape from New York but lost his role to Kurt Russell. During the time period between 1976 and 1994, he took on smaller film projects, specifically those by Cannon Films. His last starring role in a theatrically released film was Death Wish V: The Face of Death in 1994 before his death.

Retrieved from "https://movies.fandom.com/wiki/Charles_Bronson?oldid=72589"
Community content is available under CC-BY-SA unless otherwise noted.