watch 01:38
The Loop (Movies)
Do you like this video?
Charlie Sheen 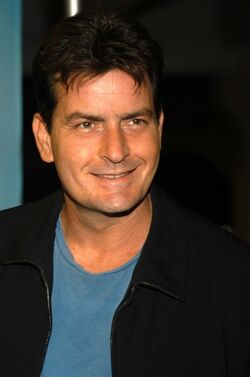 Sheen was born in New York City to parents Janet Templeton and Martin Sheen, whose birth name is Ramón Gerardo Antonio Estévez. He has two brothers and one sister, all of whom are now actors: Emilio Estevez, Ramón Estevez Jr. and Renée Estevez.

Sheen attended Santa Monica High School, where his two major interests were acting and baseball. His friends in school included Rob Lowe and Sean Penn, and with them, he filmed over 200 amateur Super-8 films. He was a pitcher for the baseball team, and his fastest pitch was 84 mph. A few weeks before graduation, Sheen was expelled from the school for poor grades and bad attendance.

Sheen began acting in 1974 at the age of nine, appearing in a small role alongside his father in the TV movie The Execution of Private Slovik. Sheen's film career began in 1984, and his first major role was in Platoon (1986). In 1987, he starred with his father, Martin, in Wall Street.

Sheen is perhaps best known for his comedy roles, including the Major League films and the Hot Shots! films. In 2000, Sheen played himself in the comedy Being John Malkovich.

In 2001 and 2002 Sheen played the lead role in the political television sitcom, Spin City (as Michael J. Fox's replacement on that show). In 2002 he won the Golden Globe Award for "Best Performance by an Actor in a Television Series - Musical or Comedy" for this role (Awards detailed below).[1] Currently Sheen plays the role of Charlie Harper on the sitcom Two and a Half Men, which debuted in 2003.

Sheen was the 2004 spokesperson for the Lee National Denim Day breast cancer fundraiser that raised millions of dollars for research and education regarding the disease. Sheen stated that a friend of his died due to breast cancer, and he wanted to try to help find a cure for the disease.

On March 20, 2006, Sheen revealed during an Alex Jones interview that he questions the "official story" concerning the September 11, 2001 attacks. Sheen stated during the interview, "There was a feeling, it just didn't look like any commercial jetliner I've flown on any time in my life and then when the buildings came down later on that day I said to my brother, 'Call me insane, but did it sorta look like those buildings came down in a controlled demolition?'" [2] Sheen further stated "It seems to me like, you know, 19 amateurs with box cutters taking over four commercial airliners and hitting 75 percent of their targets, that feels like a conspiracy theory." [3]

Sheen's remarks were subject to some mainstream media coverage. CNN's Showbiz Tonight discussed Sheen and his theories on March 22, 23 and 24 2006.[4][5][6] Sheen also appeared on Jimmy Kimmel Live on April 14, 2006 and briefly addressed the issue.[7]

In June 2006, Sheen appeared and spoke at the 9/11 + The Neo-Con Agenda Symposium in Los Angeles, California, a conference organised to discuss various 9/11 conspiracy theories.[8][9]

Sheen and his former girlfriend Paula Profit, had a daughter together, Cassandra Jade Estevez (born 1985), but did not marry. Years later, Sheen married Donna Peele. The marriage lasted a little more than 1 year—September 3, 1995 to November 19, 1996. On June 15, 2002 he married actress Denise Richards after meeting her while filming Good Advice in 2001. They have two daughters, Sam J Estevez (born March 9, 2004), and Lola Rose Estevez (born June 1, 2005).

In 1990, Sheen accidentally shot his then-fiancée, Kelly Preston; in the arm; the relationship ended shortly thereafter. In 1993, his name was found among Hollywood Madam Heidi Fleiss's list of her most frequent customers, and it was revealed that Sheen hired highly compensated prostitutes from escort agencies. During this time, it was reported that he was addicted to cocaine.[10] In the Empire magazine interview, he stated that he took a bullet for the industry when he was called to the court to testify.

On April 19, 2006, Denise Richards filed for divorce from Sheen under the laws of the state of California.[11] In her 17-page court filing, Richards alleged that Sheen's behaviour was increasingly erratic, making their marriage impossible, and that she feared for her safety, and for the safety of their daughters. Richards' filings came days after Sheen's appearance on Alex Jones' radio show discussing his questions about the 9/11 attacks.

Retrieved from "https://movies.fandom.com/wiki/Charlie_Sheen?oldid=108657"
Community content is available under CC-BY-SA unless otherwise noted.