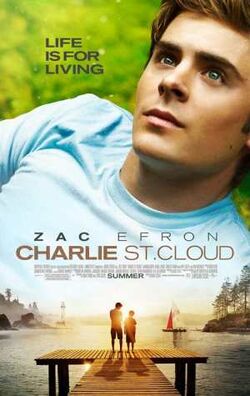 Charlie St. Cloud is a 2010 romantic drama film based on Ben Sherwood's best-selling novel, The Death and Life of Charlie St. Cloud published in 2004 by Bantam Books. The film is directed by Burr Steers and stars Zac Efron and Amanda Crew. The story is of Charlie St. Cloud's choice between keeping a promise he made to his brother, who died in a car accident, or going after the girl he loves. In some markets the film used the complete title of the book.

Charlie St. Cloud is a sailor who wins a professional boating race on his sailboat, the Splendid Splinter, along with his younger brother Sam. He subsequently receives a sailing scholarship to Stanford University. Charlie graduates from Winslow High School and after getting home from his graduation ceremony, Charlie promises Sam that they will practice baseball together every day until he leaves for Stanford; at sunset when the “Bailey’s Yacht Club” ceremonial cannons sound. Later that night, Charlie was supposed to go to a graduation party with his friends, but his mother Claire makes him babysit Sam while she picks up another shift at her job as a nurse.

When Sam is watching television, Charlie tries to sneak out and go to the party. But he is caught by Sam when he turns his headlights on, and Sam asks Charlie to drive him to his friend Tommy's house to watch the Red Sox game. At first Charlie refuses, but gives in when Sam makes compliments about his car. While driving, Charlie and Sam talk about Charlie's departure and horseplay until they get into a bad car accident at an intersection. Their car is rear ended by an SUV, forcing them into the path of a Mack truck in a T-bone collision. In the dark, during an out-of-body experience, Charlie hugs a badly wounded Sam and tries to reassure him that everything will be fine once he takes the blame for his actions.

Knowing that his injuries are fatal, Sam asks Charlie to never leave him alone again, saying that if he does, they will always be together as brothers. Just when Charlie promises they will always be together, a paramedic named Florio Ferrente revives Charlie, who sobs in horror when he realizes that Sam has succumbed to his wounds and died in his arms. At Sam's funeral, a broken-hearted Charlie runs off after being unable to put Sam's baseball glove in the grave. After a heartbroken run through the neighboring woods, Charlie finds Sam's spirit and discovers that Sam can interact with him on the physical plane. After their reunion, Charlie fulfills Sam's dying wish by practicing baseball with him every day at sunset, in the canyon, after the sounding of the cannons.

Five years later, Charlie, who gave up his scholarship and mournful over Sam's loss, is now caretaker at Waterside Cemetery. During a trip into town, Charlie visits the boat docks and meets Tess Carrol, a sailor who is scheduled to sail solo around the world. The following day, Charlie runs into Florio Ferrente, the paramedic who saved his life. Ferrente is dying of cancer and questions Charlie if he ever wonders why he was saved and tells him there is a reason for his gift. Charlie returns to the cemetery and finds Tess injured tending her father's grave. He takes her back to his home to patch her up and they develop a relationship. Meanwhile, Sam begins to feel that he is being transparently erased from existence as a certain sign that Charlie is forgetting him when Charlie arrives late for their game of catch. However, Tess follows Charlie and he explains to her that the more he is in her world, the less he can be in Sam's.

Later, Charlie discovers that Tess had gone missing while sailing through a storm a few days earlier, revealing that Charlie could see her just like he could Sam. Ferrente's wife Carla comes to Charlie and tells him that Ferrente had died the previous night and to give him his St. Jude medal that he wore the night Charlie was revived. Charlie examines the pendant. After one of the evenings Charlie and Tess have together they play hide and seek. Tess sticks a note on the door which says "come find me" with a drawing of a boat under. Later on in the story this is seen as her asking Charlie to find her after the storm has washed her on shore but she is dying. It is then that Charlie realizes that Tess is not dead and that he has to find her to save her life.

Along with his friend Alistair and Tess's coach Tink, Charlie takes a boat to find Tess based on Charlie's instincts that he knows where she is due to what she told him and what he'd do himself. The following sunset, Charlie finally misses his game with Sam. As Charlie confesses his love for his departed sibling, Sam simply tells Charlie that he loves him back and takes off as a shooting star to point out Tess' location. The group finds Tess' wrecked boat along with her lying on the rocks. Charlie uses his body heat to keep both himself and Tess warm until the two are eventually found by a Coast Guard Jayhawk called in by Tink.

Charlie and Tess are taken to the hospital where Alistair tells Charlie that Tess had hypothermia and that he saved her. Later, Charlie purchases an old boat and asks Tess if she would like to take a ride with him. However, Tess fears him explaining that she had been having vivid dreams about them together. Charlie tells Tess that her dreams are memories and recites a quote from her dad's funeral that they had spoken about in her dreams. Charlie decides to resign from his job and goes into the forest to reminisce and say farewell to Sam, telling him they'll always be brothers and although he is unable to see him, Sam is there too and reveals that he's at peace, before Charlie leaves the forest with Tess. During the credits, Charlie and Tess finally sail around the world and say goodbye to the citizens of Quincy Harbor, Washington. 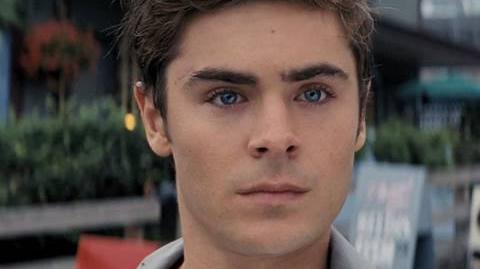