Start a Wiki
watch 01:48
The Loop (Movies)
Do you like this video?
Charlize Theron 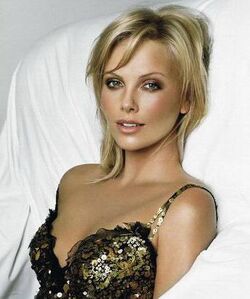 Charlize Theron originally planned on being a dancer but got a modeling contract at the age of sixteen. From there she began her acting career. She became most famous in 2003 for her portrayal of serial killer Aileen Wuornos in Monster. She later won the Academy Award for Best Actress in 2004. She got a star on the Hollywood Walk of Fame in 2005. In 2011 she starred in the film, Young Adult, and she has been nominated for several awards for her performance. In 2012 she starred in the film Prometheus as an official of the Weyland Corporation, a film which was directed by Ridley Scott.

Retrieved from "https://movies.fandom.com/wiki/Charlize_Theron?oldid=41296"
Community content is available under CC-BY-SA unless otherwise noted.