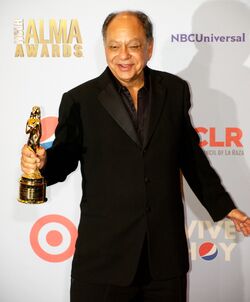 Cheech Marin (July 13, 1946) is an American comedian, actor, voice actor and writer. He is best known for the Cheech & Chong films as Pedro de Pacas and also the Spy Kids films. He voiced in Disney films such as Oliver & Company, The Lion King and the Cars films.

Retrieved from "https://movies.fandom.com/wiki/Cheech_Marin?oldid=312341"
Community content is available under CC-BY-SA unless otherwise noted.