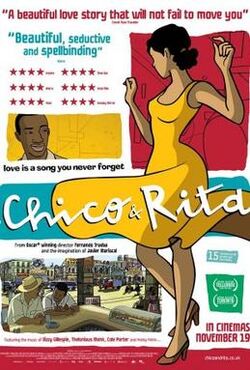 Chico & Rita is an animated feature-length film directed by Fernando Trueba and Javier Mariscal. The story of Chico and Rita is set against backdrops of Havana, New York City, Las Vegas, Hollywood and Paris in the late 1940s and early 1950s. Music and romantic desire unite piano player Chico and singer Rita, but their journey – in the tradition of the Latin ballad, the bolero – brings heartache and torment.

Retrieved from "https://movies.fandom.com/wiki/Chico_%26_Rita?oldid=60342"
Community content is available under CC-BY-SA unless otherwise noted.