Child's Play 2 is a 1990 American horror film, the sequel to Child's Play, written by Don Mancini and directed by John Lafia. It was released on November 9, 1990, exactly two years after the first film was released.

Two years have passed and Andy Barclay (Alex Vincent) has been placed in foster care, and his mother committed to a mental hospital.

Play Pals (the company behind the Chucky doll) is still trying to manage the bad publicity that arose from the events of the previous film. They use the melted parts of the possessed doll to rebuild it and in the process one of the factory workers is electrocuted and killed when the machine malfunctions.

The CEO orders to cover up the worker's death. The doll is rebuilt anyway and the CEO's assistant, Mattson (Greg Germann) takes it with him, but the doll turns out to still be possessed with Chucky's spirit and kills Mattson by suffocating him.

Chucky manages to find the location of Andy's foster family, the Simpsons & sneaks into the house and takes the place of the home's Tommy doll (which is in the same line of Good Guy dolls).

Once everyone is asleep, Chucky ties Andy up and starts the voodoo ritual that is supposed to transfer his soul into Andy's body. Kyle (Christine Elise), Andy's foster sister, interrupts the process. Andy tries to warn her and their foster parents about what Chucky is, but no one believes him. Phil (Gerrit Graham), Andy's foster father, throws Chucky into the basement.

The next day, Chucky follows Andy to school and tries to grab him there. Andy escapes, but Chucky kills Miss Kettlewell (Beth Grant), Andy's teacher before returning to the house and waiting for the next opportunity.

Once again, Andy tries to explain what happened to his foster parents, but they show him that Chucky cannot have done it because he is in their basement. That night, Andy arms himself with an electric carving knife and heads into the basement to kill Chucky. There is a struggle that attracts the attention of Andy's foster father, and when Phil arrives to check it out, Chucky drops on him and snaps his neck.

Andy's foster mother, Joanne (Jenny Agutter), believes that Andy is responsible for killing Phil and sends him back to the foster care center. Joanne tells Kyle to get rid of the Chucky doll. Kyle throws Chucky into the garbage, but while she is outside she discovers the original Tommy doll, buried in the ground. Then she realizes that Chucky is gone from the garbage and that Andy was telling the truth.

Kyle rushes back into the house, but Joanne is already dead. Chucky reveals himself and kidnaps Kyle, forcing her to bring him to the foster center where Andy is. At the foster center, Chucky kills the social worker that's watching over him, nd takes Andy away.

They leave for the nearby Good Guy dolls factory, Kyle secretly chasing after them. In the factory, Chucky again attempts to do the voodoo ritual, and this time finishes it. However, he has waited too long and the spell no longer works, leaving Chucky permanently trapped inside the doll.

Enraged, Chucky chases Andy and Kyle through the factory, intending to kill them. Chucky looses one of his hands after Kyle crushes it in machinery, and he later inserts his knife blade into the fleshlike wound to use as a weapon.

Kyle and Andy eventually manage to get the upper hand, pouring hot melted plastic on him and then putting an air hose into his mouth that causes his head to inflate and explode, finally killing him. Andy and Kyle walk out of the factory into the bright new morning. Andy asks where they are going, to which Kyle replies "Home", even though now, neither one knows where home is.

An extended ending reveals that a chunk of Chucky's skin after his head exploded got mixed in with the Good Guy doll making plaster. A machine is then seen making a new Good Guy Doll head, which then forms a sinister smile, setting up the events for Child's Play 3.

The sequel was in pre-production when an UA executive told producer David Kirschner that the film was put on hold as the studio was about to be acquired by the Australian group Qintex, who decided that it was in their best interest not to make any horror films.

Don Mancini stated that in an early draft of his script, the film was set during the Christmas season which would have explained why there were so many Good Guy dolls in the factory during the finale.

All of Brad Dourif's voice-over work was recorded in advance so they could match up Chucky's mouth with the words. Because of this, Dourif rarely appeared on the set and instead, the recordings of his voice would be played back for Alex Vincent to go by.

Richard Harrington from the Washington Post called the film "an inevitable sequel that's not as good as its progenitor, but better than most movies with the numbers 2 through 8 in their titles." 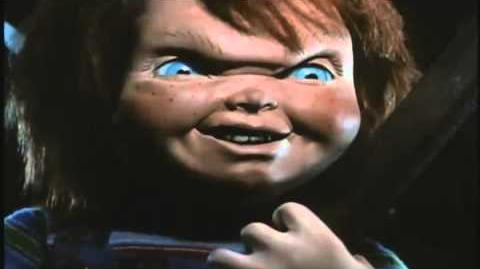 Child's Play 2 Trailer
Add a photo to this gallery
Retrieved from "https://movies.fandom.com/wiki/Child%27s_Play_2?oldid=301534"
Community content is available under CC-BY-SA unless otherwise noted.