Start a Wiki
watch 01:48
The Loop (Movies)
Do you like this video?
Chimpanzee 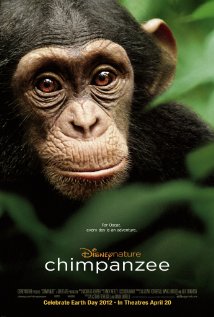 In the documentary Chimpanzee, A 3-year-old chimpanzee named Oscar is separated from his troop and is then adopted by a fully-grown male.

The film was co-produced by Disneynature and the Jane Goodall Institute. It is the fourth original film from Disneynature, following Earth, The Crimson Wing: Mystery of the Flamingos, Oceans, African Cats and Hidden Beauty: A Love Story That Feeds the Earth. It's release coincides with Earth Day on April 22, 2012. As with other Disneynature releases, a portion of the film's opening week proceeds will be donated to the Jane Goodall Institute to help protect chimpanzees and their habitats.

One music track, "Rise" by the McClain sisters, has been released to date.

Retrieved from "https://movies.fandom.com/wiki/Chimpanzee?oldid=119335"
Community content is available under CC-BY-SA unless otherwise noted.