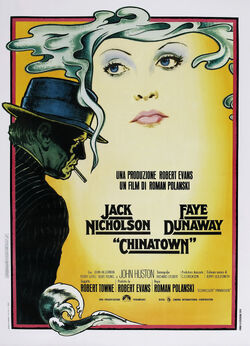 Chinatown, a 1974 American neo-noir film directed by Roman Polanski, has been called one of the greatest films ever made.

The film stars Jack Nicholson, Faye Dunaway and John Huston in a screenplay written by Robert Towne. The film features many elements of the film noir genre, particularly a multi-layered story that is part mystery and part psychological drama. The story was inspired by the California Water Wars, the historical disputes over land and water rights that had raged in southern California during the 1910s and 1920s, in which William Mulholland acted on behalf of Los Angeles interests to secure water rights in the Owens Valley.

Jake Gittes, a former cop who now specializes in divorce investigations, meets a woman pretending to be the wife of Hollis Mulwray, the chief engineer of the Los Angeles Water and Power Company. Claiming that people have seen Hollis with another woman, she asks Jake to investigate her husband’s alleged infidelity.

Jake begins his investigation by listening to testimony at a public hearing for a proposed dam and reservoir. Though the city is suffering through a drought, Hollis opposes the project, sending the audience into an angry uproar. One man accuses Hollis of being paid to steal water. Jake then trails Hollis, who spends most of the day checking out the city’s water supplies. Later, Jake takes photos of Hollis embracing a blond woman, which he gives to his client. Without Jake’s knowledge, the newspaper prints the photographs the next day.

This event brings the real Mrs. Evelyn Mulwray into his office, where she threatens to sue Jake for ruining her husband’s name. Jake attempts to find Hollis at his office but is instead escorted out by the chief deputy engineer, Russ Yelburton, and his assistant, Claude Mulvihill. Jake then drives to the Mulwray mansion to convince Evelyn that he was set up along with her husband, and she quickly agrees to drop the proposed lawsuit. When Jake demands to talk to Hollis, Evelyn suggests he look for him at Oak Pass Reservoir. By the time Jake arrives, the police have already discovered Hollis’s drowned body in the empty reservoir. Later, Jake investigates a dry riverbed where another drowning death occurred and meets a Mexican boy who tells Jake that he once reported to Hollis about the periodic flooding of the supposedly dry waterway. That night, Jake returns to the reservoir where the police found Hollis’s body. He hears two gunshots—the signal to open the sluice—and jumps into an empty run-off channel for cover. Jake nearly drowns when water comes coursing down the channel but manages to scramble to safety. He then comes across Mulvihill, who threatens Jake for trespassing. Mulvihill pins Jake’s arms back while an unnamed hoodlum slices Jake’s nostril open with a knife and warns him to stay off the case.

Later, Jake meets with Evelyn and accuses her of hiding something. He tells her that Hollis was murdered because he discovered that portions of the city’s water supply were being dumped into run-off channels in order to create a drought and build support for the new reservoir.

The next day, Jake returns to Yelburton’s office. There, a secretary tells him that a man named Noah Cross once owned the city’s entire water supply, but his business partner Hollis Mulwray persuaded him to turn it over to the city. Jake accuses Yelburton of arranging both the pictures and Hollis’s death. Yelburton denies these claims, but suggests that some water is being diverted to irrigate orange groves in the San Fernando Valley, outside of the city limits. Jake then returns to his own office, where Evelyn officially hires him to find out who killed her husband. Jake also reveals that he knows her father is Noah Cross, a revelation that makes Evelyn visibly nervous. Evelyn explains her nervousness by saying that her father and Hollis had a falling out over the Water Department, but she unintentionally hints that their disagreement may have had something to do with herself as well.

Jake meets with Cross, who abruptly asks Jake if he has slept with Evelyn, which he has not. Cross then probes Jake for information, finally hiring him to find Hollis’s missing girlfriend. Later, in the Hall of Records, Jake discovers that farmland is being sold rapidly in the Valley’s drought area. Jake drives into the Valley, where a farmer confesses that, rather than secretly irrigating the farm, officials from the city regularly come in to poison his water and blow up his tanks. Jake realizes that Cross and the land speculators have been fabricating the drought in order to force farmers into quickly selling their land at low prices. After the dam Hollis opposed is built, the area will become fertile again and Cross and the other new landowners will be able to sell the land at an enormous profit.

Jake tells Evelyn Mulwray what he has learned about this scheme, and the two discover that Cross and his associates at the Albacore Club, a private association of the wealthy and powerful, are hiding the scheme by purchasing the land in the name of the residents of a local rest home of which they are benefactors. Returning to the Mulwray home, Jake and Evelyn wind up in bed together. While lying there, Evelyn receives a phone call and leaves the house suddenly. Jake secretly trails her to an unfamiliar house, where the young blond woman he saw earlier with Hollis is lying on a bed, apparently restrained. Jake confronts Evelyn about the woman, and Evelyn says that she is her sister.

The next morning, Lieutenant Escobar of the Los Angeles Police Department finds the fraudulent Mrs. Mulwray (an actress named Ida Sessions) dead and accuses Jake of withholding evidence that proves Evelyn killed her husband. Escobar tells Jake that Hollis was found with saltwater in his lungs, suggesting that his body was moved to the freshwater reservoir. Jake returns to the Mulwray mansion, where he learns that a backyard pool is filled with salt water, and he finds that it contains a pair of broken glasses. Jake deduces that Evelyn drowned Hollis in the pond. He rushes to the house where Evelyn is hiding her sister. There, he sees Evelyn packing hurriedly. Jake calls the police and confronts Evelyn with his theory, showing her the broken glasses.

Evelyn denies everything but finally confesses the secret she’s kept throughout the movie: the blond girl, Katherine, is really her daughter as well as her sister, the result of an incestuous relationship Evelyn had with her father, Noah Cross. Evelyn claims that Cross had Hollis killed because Hollis and Evelyn tried to keep him away from Katherine. Evelyn points out that the broken glasses were not Hollis’s, as Hollis did not wear bifocals, and Jake deduces that they must have belonged to Cross. Jake decides to help Evelyn and Katherine escape, suggesting they hide in Chinatown, his former beat and the site of many bad memories for Jake. After leading the police away from Evelyn’s true location, Jake arranges for a former client to smuggle Evelyn and Katherine out of Chinatown and into Mexico.

Jake arranges a final showdown with Cross at the Mulwray mansion, showing him evidence of both the land grab and the murder. Mulvihill, who accompanied Cross, holds a gun to Jake’s head and forces him to lead them to Chinatown and the girl. Cross finds the pair on the verge of escaping and pleads with Evelyn to hand Katherine over to him. Instead, Evelyn pulls a gun on Cross, shooting him in the arm before attempting to flee with Katherine in their car. The police, ignoring Jake’s claims that Cross is the true criminal, fire on the car and end up killing Evelyn. Cross then takes the hysterical Katherine away, and Lieutenant Escobar orders the stunned Jake to go home.

Chinatown was the last Roman Polanski film made in the United States before his escape to Europe.

Retrieved from "https://movies.fandom.com/wiki/Chinatown?oldid=137415"
Community content is available under CC-BY-SA unless otherwise noted.