Start a Wiki
watch 01:27
The Loop (Movies)
Do you like this video?
Christian Serratos 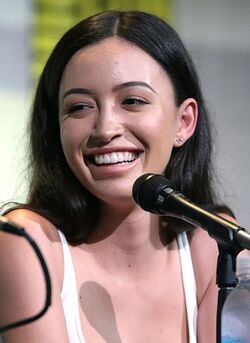 Christian Marie Serratos is an American actress. She is best known for portraying Angela Weber in Twilight, New Moon and Eclipse, which are based on the Twilight novels by Stephenie Meyer and Suzie Crabgrass in Ned's Declassified School Survival Guide.

Serratos was born in Pasadena, California and raised in Los Angeles. She began figure skating when she was three, and continued competitively for 10 years, saying, "My coaches were talking about the Olympics and it was really crazy. Now, I just do it for fun."

She portrayed Angela Weber in the movie Twilight, which won her the "Young Supporting Actress" award in the Best Performance in a Feature Film category at the 30th Young Artist Awards. Serratos reprised the role in Twilight's sequels, The Twilight Saga: New Moon and The Twilight Saga: Eclipse. In 2011 she appeared in The Black Keys video for their song "Howlin' for You".

Retrieved from "https://movies.fandom.com/wiki/Christian_Serratos?oldid=158499"
Community content is available under CC-BY-SA unless otherwise noted.