watch 00:59
The Loop (Movies)
Do you like this video?
Christopher Lloyd 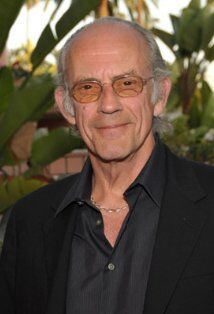 Christopher Allen Lloyd (born October 22, 1938)[1] is an American actor. Among his best-known roles are Emmett "Doc" Brown in the Back to the Future trilogy, Uncle Fester in The Addams Family and its sequel Addams Family Values, and Judge Doom in Who Framed Roger Rabbit. He rose to prominence in the 1980s as Jim Ignatowski in the television series Taxi.

Lloyd has used his vocal talents in animation, frequently voicing villains. He provided the voice of the character Hacker on the animated PBS series Cyberchase. Lloyd has won three Primetime Emmy Awards and an Independent Spirit Award, and has been nominated for two Saturn Awards and a Daytime Emmy Award.

Lloyd was born in Stamford, Connecticut, the son of Samuel R. Lloyd, a lawyer, and his wife Ruth (née Lapham), a singer and sister of San Francisco mayor Roger Lapham.[2] He is the youngest of four girls and three boys, one of whom, Samuel Lloyd, was an actor in the 1950s and 1960s.[1] Lloyd's maternal grandfather, Lewis Lapham, was one of the founders of the Texaco oil company,[3] and Lloyd is also a descendant of Mayflower passengers including John Howland.[2] Lloyd attended the Fessenden School, a preparatory school in Newton, Massachusetts. Lloyd was raised in New Canaan, Connecticut, and attended high school in nearby Westport.[1]

Lloyd began acting when he was 14, and started apprenticing in summer stock.Template:Ifsubst He took acting classes in New York City at age 19--some at the Neighborhood Playhouse with Sanford Meisner[1]--and made his New York theater debut in Fernando Arrabal's play And They Put Handcuffs on the Flowers. Lloyd recalled, "I was a replacement and it was my first sort of job in New York."[1] He made his Broadway debut in the short-lived Red, White and Maddox, and went on to Off-Broadway roles in A Midsummer Night's Dream, Kaspar, The Harlot and the Hunted, The Seagull, Total Eclipse, Macbeth, In the Boom Boom Room, Cracks, Professional Resident Company, What Every Woman Knows, 'The Father, King Lear, and Power Failure. He returned to Broadway for the musical Happy End.[1]

His first movie role was as a psychiatric patient in One Flew Over the Cuckoo's Nest.[4] He is perhaps best known for his roles as "Reverend" Jim Ignatowski, the ex-hippie cabbie on the TV sitcom Taxi, and the eccentric inventor Emmett "Doc" Brown in the Back to the Future trilogy of science-fiction films, for which he was nominated for a Saturn Award. In 1986, he played the reviled Professor B.O. Beanes in the television series Amazing Stories, and the villainous Major Bartholomew 'Butch' Cavendish in The Legend of the Lone Ranger and its numerous spin-offs, and appeared in that role in a variety of other incarnations as well. Some of his other notable roles include Klingon Commander Kruge in Star Trek III: The Search for Spock, Professor Plum in Clue, Professor Dimple in an episode of Road to Avonlea (for which he won a Primetime Emmy Award for Outstanding Lead Actor in a Drama Series), the title role in The Pagemaster, the villain Judge Doom in Who Framed Roger Rabbit, a wacky sound-effects man named Zoltan in Radioland Murders, and Uncle Fester in the big-screen adaptations of The Addams Family.

In 1994, he played an angel named Al in the movie "Angels in the Outfield". In 1999, he was reunited onscreen with Michael J. Fox in an episode of Spin City entitled "Back to the Future IV — Judgment Day", in which Lloyd plays Owen Kingston--the former mentor of Fox's character, Mike Flaherty's--who stops by City Hall to see him, only to proclaim himself God. That same year, Lloyd starred in the movie remake of the 1960s series My Favorite Martian. Also in November 2007, Lloyd was reunited onscreen with his former Taxi co-star Judd Hirsch in the Season 4 episode "Graphic" of the TV series Numb3rs. He starred in the television series Deadly Games in the mid-1990s, and was a regular in the TV series Stacked in the mid-2000s.

Lloyd portrayed the star character in the point-and-click adventure game Toonstruck, released in November 1996. He played Ebenezer Scrooge in a 2008 production of A Christmas Carol at the Kodak Theatre with John Goodman and Jane Leeves. In 2009, he appeared in a trailer for a "fake horror" film entitled Gobstopper, in which he played Willy Wonka as a horror-movie-style villain.[5] In October 2009, he did a two-man show with comic performer Joe Gallois in several Midwest cities. Lloyd also played Mr. Goodman in the 2010 remake Piranha 3D.

In September 2010, he reprised his role as Doctor Emmett Brown in Back to the Future: The Game, an episodic adventure game series developed by Telltale Games.[6][7]

In the summer of 2010, he starred as Willy Loman in a Weston Playhouse production of Death of a Salesman.[8]

In August 2011, he reprised the role of Dr. Emmett Brown (from Back to the Future) as part of an advertising campaign for Garbarino,[10] an Argentine appliance company, and also as part of the Nike Company's "Back For the Future" campaign for the benefit of The Michael J. Fox Foundation. In 2012 and 2013, Lloyd reprised the role of Brown in two episodes of the claymation series Robot Chicken. He will be a guest star on the 100th episode of the USA Network sitcom, Psych as Martin Khan on March 27, 2013.

Lloyd seldom appears in public or gives interviews. His nephew, Sam Lloyd, is best known for playing Ted Buckland, the lawyer on Scrubs.

Lloyd's home was destroyed in the Tea Fire of November 2008 in Montecito, California.(citation needed) On May 1, 2010, he appeared at an outdoor screening of Back to the Future held by the Tampa Theatre at The River Tower Park in Tampa, Florida, where he participated in a question-and-answer session.[11]

Retrieved from "https://movies.fandom.com/wiki/Christopher_Lloyd?oldid=108665"
Community content is available under CC-BY-SA unless otherwise noted.