Start a Wiki
watch 01:38
The Loop (Movies)
Do you like this video?
Christopher McDonald 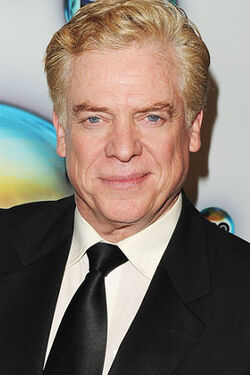 McDonald was born in New York City, the son of Patricia, a nursing professor and real estate agent, and James R. McDonald, an educator and high school principal.[1][2][3] He is of Irish descent.[4][5] He was raised in Romulus, New York, and is a graduate of Hobart College in Geneva, New York where he played football and soccer. His younger brother, actor Daniel McDonald, died of brain cancer in February 2007.[6]

McDonald has numerous film and television roles, often as a supporting actor and often portraying villains. In addition to the above, his credits also include Grease 2, Breakin', Where the Boys Are '84, The Boys Next Door, Thelma & Louise, Grumpy Old Men, Celtic Pride, Quiz Show, Flubber, The Faculty, The Perfect Storm, House Arrest, Dirty Work, American Pie 5: The Naked Mile, Broken Flowers, and Spy Kids 2: The Island of Lost Dreams. He was featured as Ward Cleaver in the movie version of Leave It to Beaver and famous baseball broadcaster Mel Allen in 61*. In 1994, he starred in the film Terminal Velocity as an aggressive Russian mafia villain.

In television, along with recurring roles on the TV series Family Law, North Shore, Veronica's Closet, Good Advice, and Harry's Law, McDonald has also made guest appearances on Cheers, Riptide, Knight Rider, The Sopranos, Psych, both the 1985 and the 2002 versions of The Twilight Zone, Home Improvement, Las Vegas, the Law & Order franchise, Stargate Universe, and Star Trek: The Next Generation as Lt. Richard Castillo in the season three episode "Yesterday's Enterprise".

McDonald's voice work includes the determined government agent Kent Mansley in the animated film The Iron Giant. He also voiced Jor-El in Superman: The Animated Series and subsequently an older version of Superman in Batman Beyond. He has recalled great affection for these roles, saying that he enjoyed them because he was (and continues to be) such a fan of Superman and because they were in such contrast to the less than sympathetic onscreen roles for which he is known. He subbed for Burt Reynolds as Boss Hogg in The Dukes of Hazzard: The Beginning. In 2009, McDonald also lent his voice talents in the Thomas Nelson audio Bible production known as The Word of Promise. In this dramatized audio, McDonald played the role of Luke.[7][8]

McDonald played the eponymous lead in Peter Gabriel's music video for the song "The Barry Williams Show". He also replaced Robert De Niro in the Midnight Run movie franchise, playing Jack Walsh in three films: Another Midnight Run, Midnight Runaround, and Midnight Run for Your Life. He portrayed baseball player Joe DiMaggio in the ESPN original series The Bronx Is Burning. In October 2013, McDonald started filming for A Conspiracy on Jekyll Island.[9] The film is set to release in 2017.[10]Template:Failed verification

McDonald appears in the Broadway show The Front Page at the Broadhurst Theater.[11]

Retrieved from "https://movies.fandom.com/wiki/Christopher_McDonald?oldid=106273"
Community content is available under CC-BY-SA unless otherwise noted.