watch 00:59
The Loop (Movies)
Do you like this video?
Christopher Nolan 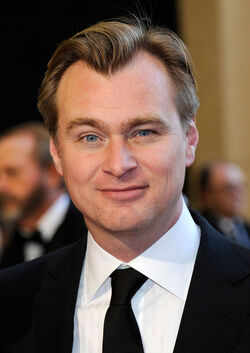 Christopher Edward Nolan (born July 30, 1970) is a British film director, producer and screenwriter. He has directed such films as the psychological thriller Memento and the revived Batman film franchise, for which he has received considerable acclaim. Since 2000, Inception is the first film that Nolan has directed that is not derived from pre-existing source material. All other films directed by Nolan in that time have either been remakes or have been based on comics, such as the movies Batman Begins and The Dark Knight. He has garnered much critical acclamation for his most recent film, Dunkirk.[1]

Nolan was born in London, England, the son of an English father who worked as an advertising copywriter and an American mother who was a flight attendant. He began filming at the age of seven, with his father's Super 8mm camera and a few toy action figures. While living in Chicago as a child, he also made short films with Roko Belic, who would go on to become a producer and director.

Nolan went to Haileybury College for his education, an independent school at Hertford Heath in Hertfordshire, England, and later studied English literature at University College London. At the same time, Nolan was filming several short films in the college film society.[2]

As a director[edit | edit source]

Other work on films[edit | edit source]

Retrieved from "https://movies.fandom.com/wiki/Christopher_Nolan?oldid=287574"
Community content is available under CC-BY-SA unless otherwise noted.