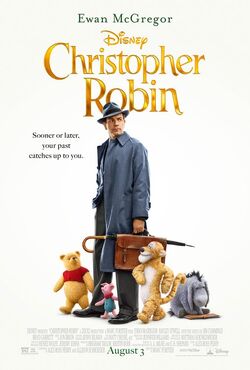 Christopher Robin is a 2018 American fantasy comedy-drama film directed by Marc Forster and written by Alex Ross Perry and Allison Schroeder, from a story by Perry. The film is inspired by A. A. Milne and E. H. Shepard's book Winnie-the-Pooh and is a live-action/CGI extension of the Disney franchise of the same name. The film stars Ewan McGregor as the titular character alongside Hayley Atwell, as well as the voices of Jim Cummings Steve Schatzberg and Brad Garrett. The plot follows Christopher Robin as he has grown up and lost his sense of imagination, only to be reunited with his old stuffed bear friend, Winnie-the-Pooh. A sequel for the film is set to be released during Summer 2021.

Plans of a live-action Winnie the Pooh adaptation were announced in April 2015, and Forster was confirmed as director in November 2016. McGregor signed on as Christopher Robin in April 2017 and principal photography began in August of that year in the United Kingdom, lasting until November.

Christopher Robin had its premiere in Burbank, California on July 30, 2018. Released in the United States on August 3, 2018, by Walt Disney Studios Motion Pictures, the film received positive reviews from critics.

Christopher Robin is leaving for boarding school, so his friends from the Hundred Acre Wood – Winnie the Pooh, Tigger, Piglet, Eeyore, Kanga, Roo, Rabbit, Owl and Gopher – throw him a goodbye party. In their usual meeting spot, Christopher comforts Pooh and tells him that he would never forget him. Despite this, his experiences in boarding school and the death of his father force him to mature quickly.

Robin subsequently goes to boarding school, grows up, meets and marries architect Evelyn, with whom he has a daughter named Madeline, and serves in the British Army in World War II. Upon returning, he finds a job as an efficiency expert at Winslow Luggages. He neglects his family due to his demanding job and plans on sending Madeline to boarding school. With his company hitting hard times, his superior, Giles Winslow Jr., tells him to decrease expenditures by 20%, largely by choosing which employees to lay off, and to present the necessary paperwork on Monday. This forces Christopher to forego his plan of traveling with his family to his countryside cottage in Sussex for the weekend before the summer ends. He reluctantly tells his family of the news; Evelyn and Madeline depart the next morning.

Meanwhile, Pooh awakens and is unable to find his friends, so he decides to travel through Christopher's door and finds himself in London, outside Christopher's house. He reunites with Christopher, who is shocked to see Pooh and reluctantly agrees to bring him back to the Hundred Acre Wood through his door near his Sussex cottage.

After sneaking past Christopher's family, the two enter the Hundred Acre Wood. Christopher becomes exasperated by Pooh's absent-mindedness and fear of Heffalumps and Woozles. This leads Christopher to get upset with Pooh about his usual antics; Christopher then tells Pooh that he isn’t a kid anymore. The two get separated in the fog. Christopher discovers Piglet and Eeyore, who lead him to the others hiding in a log out of fear of a Heffalump. Unable to persuade his friends that he is truly Christopher Robin, as they believe he's a Heffalump, he pretends to defeat a Heffalump to convince them with Eeyore's help. Everyone comes out of hiding when they realize that he is Christopher Robin all grown up, as everyone gathers over to him with joy in seeing him again. They all reunite with Pooh at their meeting spot. Christopher apologizes to Pooh for getting upset with him before; he assures Pooh that he was a bear with a big heart, and then gives him a big hug. The next morning, Christopher, who realizes that he fell asleep, leaves the Hundred Acre Wood so he shouldn’t miss his presentation. He encounters his family and, unable to tell them about the Hundred Acre Wood, quickly leaves.

Pooh realizes that Tigger has removed Christopher's paperwork in drying his briefcase, so Pooh, Tigger, Piglet and Eeyore decide to travel to London to give it back. They meet Madeline, who recognizes them from her father's drawings. She decides to join them in traveling to London so she can persuade her father not to send her to boarding school; Evelyn goes after her when she discovers Madeline's letter.

Christopher is about to present his plan, but realizes that his briefcase is filled with items given by Tigger. He is rushed out by Evelyn, and the two search London for Madeline. Madeline's group stow away in Winslow's company crates, but Piglet, Tigger and Eeyore are accidentally thrown out, and they encounter Christopher and Evelyn in the process. Madeline and Pooh arrive near the Winslow building, but the paperwork is blown away by the wind before they are reunited with Christopher's group. Christopher comforts his daughter and assures her of her importance to him and that she didn’t have to go to boarding school.

Christopher improvises a new plan involving reducing the prices of luggage, giving employees paid leave, and selling their luggage to everyday people to increase demand, instead of laying off employees. Winslow Jr. dismisses the idea, but his father Winslow Sr. warms up to it. Christopher points out Winslow Jr. wasn’t doing his part in helping with the plan, having been golfing all weekend, and Winslow Jr. is humiliated. Winslow Sr. agrees to the plan, and Christopher decides to spend time off with his family.

The Robins visit the Hundred Acre Wood and meet the rest of Christopher's friends. Christopher and Pooh share a tender moment overlooking the sunset.

In a mid-credits scene, the employees of Winslow's are seen having fun at the beach while Richard M. Sherman performs "Busy Doing Nothing" on a piano. The camera pans to Pooh and his friends relaxing on beach chairs with Eeyore saying "Thanks for noticing".

On April 2, 2015, Walt Disney Pictures announced that a live-action adaptation based on the characters from the Winnie the Pooh franchise was in development which would take a similar pattern to 2010's Alice in Wonderland, 2014's Maleficent, and 2015's Cinderella. Alex Ross Perry was hired to write the script and Brigham Taylor hired to produce the film, about an adult Christopher Robin returning to the Hundred Acre Wood to spend time with Pooh and the gang. On November 18, 2016, it was reported that the studio had hired Marc Forster to direct the film, titled Christopher Robin, and the project would have "strong elements of magical realism as it seeks to tell an emotional journey with heartwarming adventure." On March 1, 2017, Tom McCarthy was hired to rewrite the existing screenplay.

On April 26, 2017, Ewan McGregor was announced to play the title character while Allison Schroeder was recruited to do additional work on the script. On June 22, 2017, it was revealed that Gemma Arterton had been in negotiations to portray the wife of the title character but, ultimately, she passed on the role. In August and September 2017, Hayley Atwell and Mark Gatiss were cast as Evelyn, Christopher Robin's wife and Giles Winslow, Christopher Robin's boss, while Brad Garrett and Steve Schatzberg were cast as Eeyore and Piglet with Jim Cummings reprising his roles as both Winnie the Pooh. In January 2018, Chris O'Dowd, Ken Sansom, Patricia Parris and Andre Stojka were cast as Tigger, Rabbit, Kanga and Owl respectively. Chris O'Dowd was originally announced as the voice of Tigger, but later stepped down from the role after audiences in test screenings reacted negatively towards how he voiced the character and was replaced by Paul Winchell.

Principal photography on the film began in early August 2017, in the United Kingdom, and concluded on November 4, 2017. Much of the filming of the Hundred Acre Wood scenes took place at Ashdown Forest, which was the original inspiration for the setting, as well as Windsor Great Park.

Jóhann Jóhannsson was hired to score the film, shortly before his death on February 9, 2018. The film is dedicated to his memory. Klaus Badelt was announced as taking over composing duties for Jóhannsson, but the score was ultimately written by Geoff Zanelli and Jon Brion. At an Academy event, songwriter and Disney Legend Richard Sherman revealed that he was working on three new songs for the film, and that it would also feature the iconic song "Winnie the Pooh". "Up, Down and Touch the Ground" and "The Wonderful Thing About Tiggers" are also included in the film.

Christopher Robin is scheduled to be released on August 3, 2018 by Buena Vista Pictures Distribution.

On May 24, 2018, it was announced that the full trailer would premiere the following day during McGregor's appearance on The Ellen DeGeneres Show.

As of 2018, Christopher Robin has grossed $25 million in the United States and Canada, and $4.8 million in other territories, for a total worldwide gross of $29.8 million, against a production budget of $75 million.

In the United States and Canada, Christopher Robin will be released alongside The Spy Who Dumped Me, The Darkest Minds and Death of a Nation: Can We Save America a Second Time?, and is projected to gross around $30 million from 3,602 theaters in its opening weekend. The film made $9.5 million on its first day, including $1.5 million from Thursday night previews. It went on to debut to $25 million, finishing second at the box office behind holdover Mission: Impossible – Fallout.

On the review aggregation website Rotten Tomatoes, the film has an approval rating of 68% based on 111 reviews, with an average rating of 6.1/10. The site's critical consensus reads, "Christopher Robin may not equal A. A. Milne's stories – or their animated Disney adaptations – but it should prove sweet enough for audiences seeking a little childhood magic." On Metacritic, the film has a weighted average score of 59 out of 100, based on 35 critics, indicating "mixed or average reviews". Audiences polled by CinemaScore gave the film an average grade of "A" on an A+ to F scale, while PostTrak reported filmgoers gave it 4.5 out of 5 stars.

Michael Phillips of the Chicago Tribune gave the film 3 out of 4 stars and said, "Pooh's wisdom and kindness cannot be denied. The same impulses worked for the two Paddington movies, God knows. Christopher Robin isn't quite in their league, but it's affecting nonetheless." Conversely, Alonso Duralde of TheWrap called the film "slow and charmless" and wrote, "What we're left with is a Hook-style mid-life crisis movie aimed at kids, designed to shame parents who spend too much time at the office and not enough with their families. Sarah Melton from Exclaim! gave the film a rating of 5/10, calling it a "sickly sweet tale" with a predictable ending.

Add a photo to this gallery
Retrieved from "https://movies.fandom.com/wiki/Christopher_Robin_(film)?oldid=298960"
Community content is available under CC-BY-SA unless otherwise noted.