Start a Wiki
watch 01:48
The Loop (Movies)
Do you like this video?
Chronicle 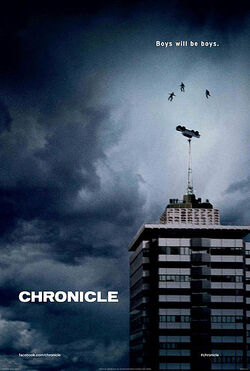 Chronicle is a 2012 science fiction film directed by Josh Trank and written by Max Landis based on a story by both Trank and Landis. The film stars Dane DeHaan, Michael B. Jordan, and Alex Russell.

The plot follows three Seattle high-school seniors Andrew (DeHaan), his cousin Matt (Russell) and fellow high school student Steve (Jordan), as they form a close bond after receiving telekinetic abilities from an unknown object. The group uses its abilities for mischief and personal gain until Andrew begins to use them for darker purposes.

The film is visually presented as found footage filmed from the perspective of various video recording devices, primarily from a hand-held camcorder used by Andrew to document the events in his life.

Released in the United Kingdom and Ireland on February 1, 2012 and in the United States on February 3, 2012, Chronicle received a positive critical response and grossed $126 million worldwide. The movie begins with Andrew Detmer who begins to videotape his life. At home, his mother, Karen, is slowly dying from cancer and his alcoholic father who verbally and physically abuses him. At school, he is unpopular and gets bullied.

Matt, Andrew's cousin, decides to help him and bring him into the social circle by inviting him to a rave. Although Matt tries to convince Andrew not to bring his camera, he insist on bring it. Throughout the party, he videotapes everything he see. After videotaping a girl dancing, a partier claim that is his girlfriend leading him to punch and spit on Andrew. Andrew leaves the rave and goes to the parking lot. Then he is approached by a very popular student, Steve, and convinces Andrew to come and record a place that Steve and Matt found in the woods. As Steve and Andrew are walking, Steve says he remembers Andrew from freshman year in homeroom. They join up with Matt who is near a hole that emit a strange sound. Steve decides to go in the to investigate followed by Matt. Scared, Andrew goes into the hole and discovers a huge crystalline object going blue. As Steve goes up to the object and touches it, the object glows red and the three are stricken by nosebleeds and pain. Steve then passes out and Matt is hit by an unknowned force while the camera suddening cuts out.

Weeks later, Andrew record themselves to display their telekinetic abilities. They do a test they call the "Ball Test". They throw a baseball at each other to see if they can stop it with their minds. Only Andrew is successful but he begins to be bleeding through his nose. Later on, the three decides to go back to the hole and see that it caved in and was blocked off by the police. Andrew begins to learn how to make his camera levitate. His bond with his Matt and Steve begins closer. Matt begin to make a theorie saying that the powers are like a muscle and if that use it too much they experience the nosebleeds. They begin to use their powers for pranks at a nearby shopping place. From making carts move, to making teddy bears move, and end by making a car move from one spot to a different.

But things turn serious when Andrew makes a car go off-road and plung into a lake. Matt begins to declare rules on using their powers.

later, Matt and Andrew get a call from Steve to go to an abandonded lot where Steve shows them they can fly. After several failed attempts by Matt, Andrew tries and succeeds on his first try. They begin to fly and play catch with a football in the clouds. They begin to hear a noise and airplane knocks them down and Andrew saves Steve and the camera. As all three land, they experience nosebleeds.

At sleepover at Steve's house, Matt says it was the best day of his life. At school, Andrew say that they should go to Tibet after gradulation. Matt goes to a girl named Casey house he met at the rave him and Andrew went to. She also records with her camera and it is put into her camera POV. Casey rejects Matt and closes the door on him. Meanwhile, Andrew and Steve decides to get out and go to the city and sit on a high building and talk. Steve persuades Andrew to go to the talent show. At the talent show, Matt records all of the activity. Andrew begins to use his powers to make cards he dropped come back into his hand, to make balls levitate, and to tightrope walk while juggeling.

Andrew goes to a party after the talent show and becomes the center of attention. Andrew meets a girl named Monica and plays beer pong. He then makes out with Monica and they go upstairs to have sex. But before they have sex, Andrew throws up on Monica embarssing himself. He becomes hostel against Steve who videotapes the whole thing. After calling his father an idiot, he uses his powers to overpower him. Andrew goes up into the clouds during a thunderstorm. Steve finds him and tries talking to Andrew to convince him to come down. Steve then gets struck by lightning, killing. After Matt begins to question him, Andrew denies and say he has no clue what happened to him but sercetly begs for forgiveness. Andrew describes himself as an apex-predator.

After being bullied at school, Andrew uses his power to pull several teeth from the bully's mouth. Andrew goes to a place to get medicine for his mother but he doesn't have the 750 dollars for it. After mugging his nearby thugs, he goes to a gas station and attempts to rob it. The cashier grabs his shotgun and Andrew it to the ground, setting it off, causing an explosion. At the hospital, Andrew father explains that his mother is dead. He blames him and attempts to punch him in his face causing him to make the hospital room to explode. Matt experiences a nosebleed and senses Andrew is in trouble. He goes to the hospital with Casey and Andrew drops his father from the building. Andrew puts the car Matt in on the Space Needle. Matt puts Casey on a nearby building. He tries to Andrew but he says he is an apex-predator and sends a bus to hit Matt. Andrew continutes to cause havok throughout the city. Andrew knocks himself out by hitting a streetlight. Police surrounds them and Andrew gets up causing the police to shot Matt. Matt flees and Andrew chases him. They both fall and Andrew gets up deflecting all of the SWAT bullets and sends all of the police cars flying. Unable to stop Andrew, Matt uses a nearby spear to kill Andrew. Matt gets up and fly away from the police.

He flies for a long time before reaching Tibet. He gives a message to Andrew using his camera saying will use his powers for good and he will try to find out what happened to them in the hole. He ends his massage saying, "You made it." before flying away, leaving the camera behind to record the tranquil scene.

Chronicle opened in 2,907 theaters in the United States on February 3, 2012.[9] Box office watchers expected the film to gross $15 million for its opening weekend, the Super Bowl weekend, while Fox projected to receive around 8 million.[10] However, by its first day the film had already earned an estimated $8.65 million[10] and finished the weekend as the top film with $22,000,000 surpassing The Woman in Black ($21,000,000) and The Grey ($9.5 million).[9] Next to an estimated production budget of $12 million, it was an unexpected financial success as the film became the fourth highest Super Bowl debut.[9] Chronicle also opened as a number one hit internationally, opening in 33 foreign markets such as Australia, China, and the United Kingdom where it earned the most with $3.5 million.[11]

Chronicle has received mostly positive reviews. Review aggregate Rotten Tomatoes reports that 85% of critics have given the film a positive review based on 151 reviews, with an average score of 7/10, making the film a "Certified Fresh" on the website's rating system. The consensus states "It arrives during a glut of found-footage films, but Chronicle transcends its gimmicks with a smart script, fast-paced direction, and engaging performances from its young, talented cast." [12] At Metacritic, which assigns a weighted mean rating out of 100 to reviews from mainstream critics, the film received a score of 69, based on 31 reviews, which indicates "Generally favorable reviews".[13]

Film critic Roger Ebert gave the film a positive review, saying "From [the] deceptively ordinary beginning, Josh Trank's Chronicle grows into an uncommonly entertaining movie that involves elements of a superhero origin story, a science-fic­tion fantasy and a drama about a disturbed teenager," giving the film 3.5 stars out of 4.[14]

Empire critic Mark Dinning gave the film 4 stars out of 5, saying the film was "A stunning superhero/sci-fi that has appeared out of nowhere to demand your immediate attention."[15]

Total Film gave the film a five-star review (denoting 'outstanding'): "Believable then bad-ass, it isn't wholly original but it does brim with emotion, imagination and modern implication."[16]

On the negative side, Andrew Schenker of Slant Magazine gave the film 2 out of 4 stars, saying the film, "offers up little more than a tired morality play about the dangers of power, rehashing stale insights about the narcissism of the documentary impulse."[17]

Chronicle was released on DVD and Blu-ray Disc on May 15, 2012. The film was released on DVD and a special "Lost Footage" edition for Blu-Ray, which contains additional footage that was not shown in theaters, notably a scene after Andrew overpowers his father where Matt and Casey have slept together, as well as a scene where Andrew returns to the cave entrance, around which the grass has formed a swirling pattern around the hole. 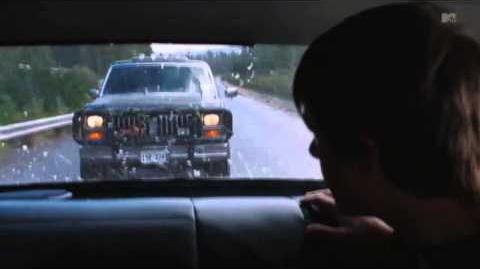 Chronicle - Official Trailer (2012)
Add a photo to this gallery
Retrieved from "https://movies.fandom.com/wiki/Chronicle_(2012)?oldid=157848"
Community content is available under CC-BY-SA unless otherwise noted.