watch 01:56
The Loop (Movies)
Do you like this video?
Play Sound
Chuck Norris 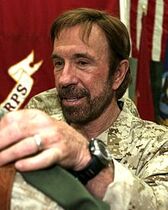 Chuck Norris is an American actor and martial artist. He is also the center of the internet phenomenon, "Chuck Norris Facts", which assigns impossible and grand feats to Norris.

Norris enlisted in the United States Air Force as an Air Policeman in 1958. He was stationed in South Korea. There, he began to become interested in martial arts. Norris began his Hollywood work as a martial artist, appearing in The Green Berets in 1968. In 1969, he was named "Fighter of the Year" by Black Belt Magazine.

Norris made his acting debut in the 1969 film, The Wrecking Crew. He starred in many action films during the 1970s, and 1980s, and in 1984, he started acting in the Missing in Action films, which gained him critical acclaim as an actor and martial artist. In 1993, he began acting in the series, Walker, Texas Ranger which further propelled him into the mainstream.

Retrieved from "https://movies.fandom.com/wiki/Chuck_Norris?oldid=129348"
Community content is available under CC-BY-SA unless otherwise noted.