English
Cinderella is a 2015 live-action fantasy film, directed by Kenneth Branagh and distributed by Walt Disney Pictures. The film is a re-imagining of the 1950 animated film of the same name and it's starring Cate Blanchett and Lily James as the evil stepmother Lady Tremaine and Cinderella, respectively. The film was released on March 13, 2015.

The story of Cinderella follows the fortunes of young Ella whose merchant father remarries following the tragic death of her mother. Keen to support her loving father, Ella welcomes her new stepmother Lady Tremaine and her daughters Anastasia and Drizella into the family home. But, when Ella's father suddenly and unexpectedly passes away, she finds herself at the mercy of a jealous and cruel new family. Finally relegated to nothing more than a servant girl covered in ashes, and spitefully renamed Cinderella, Ella could easily begin to lose hope. Yet, despite the cruelty inflicted upon her, Ella is determined to honor her mother's dying words and to "have courage and be kind." She will not give in to despair nor despise those who abuse her. And then there is the dashing stranger she meets in the woods. Unaware that he is really a prince, not merely an employee at the Palace, Ella finally feels she has met a kindred soul. It appears as if her fortunes may be about to change when the Palace sends out an open invitation for all maidens to attend a ball, raising Ella's hopes of once again encountering the charming "Kit." Alas, her stepmother forbids her to attend and callously rips apart her dress. But, as in all good fairy tales, help is at hand as a kindly beggar woman steps forward and, armed with a pumpkin and a few mice, changes Cinderella's life forever.

After the success of Tim Burton's Alice in Wonderland, Disney began developing a new adaptation of Cinderella in May 2010.[1] Director Mark Romanek was initially going to direct the movie, however, he dropped out on January 9, 2013 due to creative differences. On February 1, 2013 Kenneth Branagh (Thor) stepped in as the new director. The screenplay is co-written by Aline Brosh McKenna (The Devil Wears Prada) and Chris Weitz (The Twilight Saga: New Moon) and will star Academy Award winner Cate Blanchett as Lady Tremaine.

The role of Cinderella was originally offered by the former Harry Potter star, Emma Watson, but she eventually dropped out for she's starring in another fairy tale project Beauty and the Beast with Guillermo del Toro directing it. After Watson left, other actresses such as Saiorse Ronan, Alicia Vikander, Gabriella Wilde, Imogen Poots, Bella Heathcote, Margot Robbie and Lily James were all considered for the role. Ultimately, the role was given to Lily James (Downtown Abbey) on April 30, 2013.

On May 8, 2013, it was announced that Game of Thrones star Richard Madden was cast as Prince Charming. In June 2013, Holliday Grainger and Sophie McShera joined the film as Anastasia and Drizella. Later that month, Helena Bonham Carter was cast as the Fairy Godmother. On July 8, 2013 it was announced that Stellan Skarsgård was in talks for the role of The Grand Duke [2]. On August 19, 2013 Hayley Atwell revealed that she would be playing Cinderella's biological mother who dies when Cinderella is five years old [3]. Production on the film has started in London. It is expected to be released on March 13, 2015. 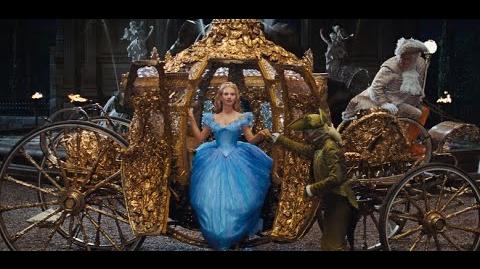 The film has received positive reviews, with critics praising the acting, particularly that of Cate Blanchett, Lilly James and Helena Bonham Carter, the directing, screenplay, art direction, costume designs and its faithfulness to the spirit and magic of the original 1950 Disney animated classic. On the review aggregator website Rotten Tomatoes, the film holds a 85% "Certified Fresh" rating, based on 178 reviews, with an average rating of 7.2/10. The site's consensus reads "Refreshingly traditional in a revisionist era, Kenneth Branagh's Cinderella proves Disney hasn't lost any of its old-fashioned magic." On Metacritic, the film has a score of 65 out of 100, based on 7 critics, indicating "generally favorable reviews".