watch 00:59
The Loop (Movies)
Do you like this video?
City of Ember 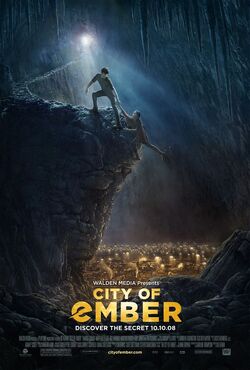 As an unspecified global catastrophe looms, an underground city known as Ember is constructed to shelter a large group of survivors. In addition, "The Builders" have a small metal box intended for a future generation of Emberites is timed to open after 200 years. This box was entrusted to the first Mayor of the City of Ember, and each Mayor passes it on to his or her successor. Emberites have flourished in a mesmerizing world of glittering lights. When the seventh Mayor suddenly dies however, the chain is broken, and overtime, the significance of the box is forgotten and tucked away. The box opens by itself at the allotted time, but this goes unnoticed. Approximately 41 years later, Ember's generator begins to fail; causing the power to go out intermittently, and food, medicine and other necessities are in dangerously short supply.

At a rite of passage for all graduating students of Ember City School, incompetent Mayor Cole stands before the students as they choose their adult occupations by lottery. Doon Harrow, the son of inventor and repairman Loris "Barrow" Harrow, is eager to save Ember even if Loris thinks that's its hopeless. A girl named Lina Mayfleet races to the ceremony on time. Doon is assigned "Messenger" while Lina is assigned "Pipeworks" and apprenticed to the elderly technician Sul. Shortly afterwards, both are displeased with their assigned jobs so they glady exchange their assignments and begin work in their respective positions (although Doon wanted to be an Electrician's Helper but Joss who received it refused to swap). Loris gives Doon a graduation gift, and Lina has already reviewed the rules to keep Ember intact.

Lina runs to deliver her first dispatch to Clary who works at the Greenhouse. A weakened man appears out of the unknown region and locals quarantine and banned him of contamination. Lina recounts to how her father died of illegal attempt to dig in search of salvation. She picks up a mandible of an enlarge beetle. Doon helps Sul wrap up leaking pipes. Sul dozes off, Doon wanting to fix the generator, walks into an unmapped tunnel, and discovers a storage room with empty selves until a worker kicks him out. After Ember experience an intensive blackout, Doon and Lina decide to collaborate. Joss reponses that the generator is beyond repair.

At home, Lina inspects her grandmother who is looking for something important. Lina finds her infantile sister, Poppy, chewing on the paper's contents in the opened box. As Lina goes to deliver a message to Cole, she sees a portrait of her great-great grandfather, the seventh Mayor, holding the same metal box. After another blackout, Lina's grandmother dies. Lina and Poppy move in with a neighbor, Mrs. Murdo. Lina saves the scraps of paper, using some glue; Lina reassembles it as best she can. She enlists Doon's help to decipher its contents. He recognizes the printed paper was typed by the Builders when comparing it to a restricted history book at the school. Gradually, they learn that it contains a set of instructions and directions for an exit from Ember. The box also contains a key card but only partial. Lina had her friend Lizzie, who is a warehouse clerk, look at the key card. Customers are complaining on the low stock of food. Lina goes with Doon to where he found a hidden vault thinking they'll find a clue, but are interrupted by a gigantic star-nosed mole and evaded it. Later on, Lina saw her father's old helmet and prominently inquires Clary, learning her father truly believe the existence of a way to the surface.

As Mayor Cole proposes a thorough solution, Lina caught Lizzie being bribed with food by the worker from earlier. While scouting the tunnels again, Doon uses a custom-made tool and unlocks the hidden vault where Cole has been hoarding canned food for his own benefit whereas the Emberites go hungry. At Mrs. Murdo's house while putting Poppy to sleep, Doon petals the Mayfleets' old answering machine tape and heard his father's voice, realizing he also tried to leave the city. He confronts Loris reassuring him that there's hope. When Lina attempts to report Cole's crime, the Mayor and even the attendants capture her and try to steal the box, but she escapes during a blackout and snatch the other key card that Cole had.

Now fugitives from the Mayor's police, Clary hides Lina and Doon in a shed at the Greenhouse. They operate a drilling rig invented by Loris to sneak pass the guards. Combining the two key cards Doon recognizes it as the generator's insignia. Lina and Doon deemed their quest to venture out to the surface, but not without Poppy. She whistles Poppy's attention amid the city's annual choir singing. Running to Pipeworks together and interpreting the paper's contents, they unearth a space filled with lockers treated as boats meant for use in the exodus. Following the boat on a moving pavement it goes down to a subterranean river as the route to leaving Ember. One thing left to do is access an unused control room and by inserting the key card to set the vast waterwheels on a certain thrust and power surge so that the boats can make it through. But one of the waterwheels is jammed. With Sul's assistance, Doon, Lina, and Poppy ride the boat managed over the lowered waterwheel and slide down a cave. When the repercussions of their actions trigger a panic in Ember, the Mayor locks himself in his vault, only to be devoured by the giant mole.

Doon, Lina, and Poppy eventually reach the end of the stream. They lit candles and climb up stairs to another room seeing a banner say "For The Good Of All Mankind!" Once they emerge onto the Earth's surface where, for the first time in their lives, witness a sunrise. A familiar looking big moth flies down a hole. They also located Ember in the hole below too far for them call to anyone. So before they explore, they drop a letter with information on how to get out, tied to a rock, into Ember, where it is found by Loris.

Retrieved from "https://movies.fandom.com/wiki/City_of_Ember?oldid=268452"
Community content is available under CC-BY-SA unless otherwise noted.