Start a Wiki
watch 01:27
The Loop (Movies)
Do you like this video?
Claudio Charles Schneider 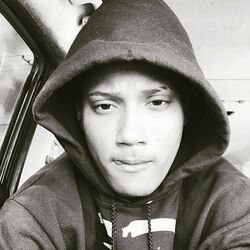 Claudio Charles Schneider (born October 12, 1995) is a Dominican-American actor. He is known for his role as Young Rafael Trujillo on the drama film based on the true story of the Dominican Republic's historic Mirabal sisters Tropico de Sangre (2010).

Claudio Charles Schneider was born on October 12, 1995 in El Cercado, San Juan, Dominican Republic. His mother named him Claudio after she saw a spisode of the BBC Television TV series I, Claudius. He was raised in West Palm Beach, Florida. Scouted by an agent in Santo Domingo, Claudio began work on commercial modeling and acting at the age of ten. He later relocated to Los Angeles, CA to continue his acting career.

Claudio scored his first major television role at the age of 15, playing young Rafael Trujillo in the drama film based on the true story of the Dominican Republic's historic Mirabal sisters Tropico de Sangre, (2010). In 2010, he also appeared in the American neo-noir psychological thriller film directed by Martin Scorsese and written by Laeta Kalogridis Shutter Island (2010), based on Dennis Lehane's 2003 novel of the same name. In 2010, he also made a cameo in the fantasy film Alice in Wonderland (2010) with Johnny Depp, Anne Hathaway, Helena Bonham Carter, Crispin Glover, Matt Lucas, Mia Wasikowska. In 2013, he also appeared in an episode of the popular Nickelodeon show, Sam & Cat]] (2013-2014). Claudio studied acting with Michael Merkel during his Master Class Workshop and continues to study with Ashley Rogers. Although his career in acting is lucrative and can bring massive opportunities at her doorstep, he wishes to get into a medical school. Besides, he is passionate about basketballl and loves playing the sport. Schneider has even tried playing flag football competitively. In a July 2011 interview he said he believed in God and that he was " probably 20% atheist and 80 % agnostic. In another dating from October 7, 2010 , Claudio told the magazine Street Fashion is no longer a Christian fundamentalist . In the interview, Schneider said: "I always wondered many things about the world , even when I was in kindergarten . A big question for me was equal . If I had been brought up with another religion , could have the same opinion of Heaven that has a Christian ? My mother had to go into my room to talk . I was very fortunate to have had that conversation with her, but in high school I started to realize that I was different from others."

Retrieved from "https://movies.fandom.com/wiki/Claudio_Charles_Schneider?oldid=118137"
Community content is available under CC-BY-SA unless otherwise noted.