watch 02:03
Wiki Targeted (Entertainment)
Do you like this video?
Play Sound
Cloris Leachman 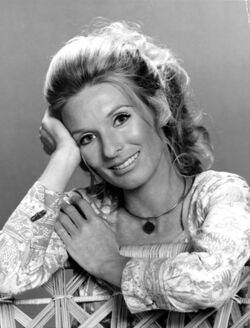 Cloris Leachman, DFA (h.c.) (born April 30, 1926 – January 26/27, 2021) is an Emmy Award and Academy Award-winning American actress of stage, film and television. She has won eight primetime Emmy Awards — more than any other female performer in history and one Daytime Emmy Award (Carl Reiner holds the record as the most award-winning performer with nine Emmy Awards; he has won three awards as a writer and one award as a producer. This makes Leachman the performer with the most Emmy wins solely for acting.)

Leachman, the eldest of three sisters, was born in Des Moines, Iowa, to Buck and Cloris Leachman. She majored in drama at Northwestern University, where she was a member of Gamma Phi Beta and was classmates with future comic actor Paul Lynde. Leachman began appearing on television and in films shortly after competing in Miss America as Miss Chicago 1946.

After winning a scholarship in the beauty pageant, Leachman studied acting in New York City at the Actors Studio with Elia Kazan. She appeared in the Broadway production of William Inge's Come Back, Little Sheba.

She began appearing in many live television broadcasts in the 1950s including such programs as Suspense and Studio One.

She made her feature film debut in the film noir classic Kiss Me Deadly, released in 1955, which Robert Aldrich directed. Leachman was several months pregnant during the filming, and appears in one scene running down a darkened highway barefoot and wearing only a trenchcoat. A year later she appeared opposite Paul Newman and Lee Marvin in The Rack (1956).

However, she continued to mainly work on television, where she appeared in a variety of shows including the classic It's a Good Life episode of The Twilight Zone, in which she plays Billy Mumy's mother, Rawhide]], Alfred Hitchcock Presents and Lassie, in which she played Timmy's mom, Ruth Martin, for one season before being replaced by June Lockhart.

Leachman has won numerous awards during her lengthy career. She won an Oscar for Best Supporting Actress in 1971's The Last Picture Show, based on the bestselling book by Larry McMurtry. She played the heartbreaking character of the high school basketball coach's wife, with whom Timothy Bottoms' character has an affair. Director Peter Bogdanovich had predicted to Leachman while they were making the film that she would win an Academy Award for her performance. The part was originally offered to Ellen Burstyn, who wanted another role in the film.[1]

When she won her Oscar, Leachman was also appearing on The Mary Tyler Moore Show, making her the first performer to win an Academy Award while appearing on a television series.

Leachman has also won a record-setting eight primetime and one daytime Emmy Awards and been nominated over 20 times for her work in television over the years, most notably as the character of neighbor/landlady/nosy friend Phyllis Lindstrom on The Mary Tyler Moore Show. The character was a fixture on the program for five years; the character left Minneapolis in 1975 and was featured in a spinoff series, Phyllis for which Leachman garnered a Golden Globe award. In 1978 she won the Sarah Siddons Award for her work in Chicago theatre.

In 1986, Leachman returned to television, replacing Charlotte Rae's character Edna Garrett as the den mother on The Facts of Life. Leachman's role, as Edna's sister, Beverly Ann Stickle, could not save the long-running series, and it was canceled two years later.

Leachman played embittered, greedy, Slavic “Grandma Ida” on the Fox sitcom Malcolm in the Middle for which she won two Emmy Awards, both for Outstanding Guest Actress in a Comedy Series (once in 2002, then again in 2006). She was nominated for the same role in that category four other times.

Leachman was nominated for a SAG Award for her role as the wine-soaked, former jazz singer and grandmother Evelyn in the Sony feature Spanglish opposite Adam Sandler and Tea Leoni. She had replaced an ailing Anne Bancroft in the role. The film reunited her with her Mary Tyler Moore Show writer-producer-director James L. Brooks. That same year she appeared with Sandler again, in the remake of The Longest Yard. She also appeared in Kurt Russell comedy Sky High.

In 2006, Leachman's performance alongside Sir Ben Kingsley and Annette Bening in the HBO special Mrs. Harris earned her an Emmy nomination for outstanding supporting actress in a miniseries or TV movie.

On May 14, 2006 she was awarded an honorary Doctorate in Fine Arts from Drake University.

Leachman has appeared in three Mel Brooks films. She played Frau Blucher in Young Frankenstein (1974), in which the mere mention of her character's name frightens all horses within earshot. She also appeared in High Anxiety, as a demented psychiatric nurse, and in History of the World: Part I.

Leachman was married for 26 years (1953 to 1979) to the Hollywood impresario George Englund, with whom she had four sons and one daughter, all of whom are in show business. Leachman and Englund divorced in 1979. Englund had a reputation of being a ladies' man and was reportedly unfaithful during the marriage, including having an affair with Joan Collins.[2]

One of her sons, Bryan Englund, died from a drug overdose in 1986. Some reports state that it was an overdose of ulcer medication, while others, such as in the Lifetime television program Intimate Portrait: Cloris Leachman (in which Leachman participated) state that it was from cocaine.[3]

Another son, George Englund Jr, was the second husband of actress Sharon Stone.[4] Leachman's other children include Adam Englund, Dinah Englund and Morgan Englund. She has several grandchildren.

Leachman is a longtime resident of Brentwood, California.

Retrieved from "https://movies.fandom.com/wiki/Cloris_Leachman?oldid=297361"
Community content is available under CC-BY-SA unless otherwise noted.