watch 00:59
The Loop (Movies)
Do you like this video?
Close Encounters of the Third Kind 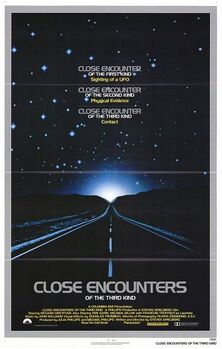 Close Encounters of the Third Kind is a science-fiction film about UFOs, written and directed by Steven Spielberg. It stars Richard Dreyfuss, François Truffaut, Bob Balaban, Melinda Dillon, Teri Garr, and Cary Guffey. The movie has visual effects by Douglas Trumbull and a score composed by John Williams.

Close Encounters was perhaps the most important science fiction movie up to that point to introduce benign or even kind aliens, a sharp departure from the 'evil monster' style of most earlier films. It popularised a number of motifs, most of which were drawn from earlier (and purportedly genuine) UFO encounters: alien abduction, small and thin aliens ("greys"), and UFOs covered in lights rather than the disc shapes more popular in the 1950s and 1960s, and so on.

The movie has been revised numerous times, notably for a 132-minute "special edition" reissue in 1980 and again for a 137-minute "collector's edition" in 1988. The Special Edition features several new character development scenes, the discovery of a lost ship, the Cotopaxi, in the Gobi Desert, and a view of the inside of the mothership. The interior of the mothership is deleted from the Collector's Edition. (Spielberg added this scene as a concession to be allowed to make the Special Edition. He decided it was a mistake and removed it in the later edition.)

After Neary's increasingly bizarre conduct causes his family to abandon him, he sees the feature he has been modelling on a television news show. He and others with similar experiences obsessively head towards the site. He meets up with Guiler en route. Elsewhere in the world, the pace of alien activity is increasing. Claude Lacombe (a character based on Jacques Vallee, played by Truffaut) investigates a host of weird occurrences along with other United Nations experts. The obsessives and the experts eventually meet up at Devils Tower in Wyoming. The United States Army evacuates the area after spreading false reports that a train wreck has spilled highly dangerous nerve gas. Neary and Guiler persist, and eventually see dozens of spacecraft appear, culminating with appearances from extraterrestrials, and the return of people who'd been abducted, including Guiler's young son Barry. The aliens spurn a group of astronauts who have been specially trained to go with them, and select only Neary, who leaves Earth in a massive alien starship.

Retrieved from "https://movies.fandom.com/wiki/Close_Encounters_of_the_Third_Kind?oldid=234948"
Community content is available under CC-BY-SA unless otherwise noted.