Start a Wiki
Cloudy with a Chance of Meatballs 2 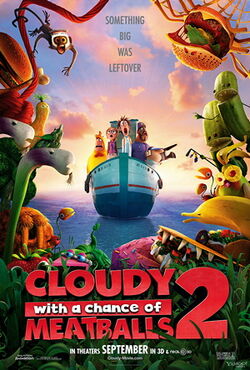 After the disastrous food storm in the first film caused by his machine, Flint Lockwood and his friends are forced to leave the town of Swallow Falls. Flint accepts the invitation from his idol Chester V to join The Live Corp Company, which has been tasked to clean the island, and where the best inventors in the world create technologies for the betterment of mankind and planet Earth. Upon arriving back at Swallow Falls, Flint discovers that his machine still operates and now creates mutant food beasts like living pickles, hungry tacodiles, shrimpanzees, and apple pie-thons. It is up to Flint and his friends to put a stop to the machine once and for all before this new form of foody life breaks free from the island and invades the planet.

The first news of the sequel came out in April 2010, when website io9 reported that the original directors, Phil Lord and Chris Miller, won't return for the sequel.[11] In December 2011, it was reported that Cody Cameron, the story artist on the first film, and Kris Pearn, the head of story on the first, would direct the sequel, with Lord and Miller serving as exec-producers. John Francis Daley, Jonathan Goldstein, and Erica Rivinoja[2] wrote the screenplay, which is based on an original story idea, not on Pickles to Pittsburgh, Ron and Judi Barrett's follow-up book.[12] In February 2012, it was announced that the sequel would be titled Cloudy 2: Revenge of the Leftovers,[13] but it was later retitled Cloudy with a Chance of Meatballs 2.[14] The film was originally scheduled for release on December 20, 2013,[15] then pushed to February 7, 2014,[16] before moving up to September 27, 2013.[7]

Bill Hader, Anna Faris, James Caan, Andy Samberg, Neil Patrick Harris, and Benjamin Bratt reprised their roles.[2] The role of Earl, the town cop, was taken over by Terry Crews, since Mr. T declined to return.[8] Kristen Schaal joined the cast to voice Barb, a talking and lipstick-wearing orangutan with a human brain.[9] Will Forte, who voiced Joseph Towne in the first film, voices Chester V, a world-famous super-inventor who commands Barb and is the head of the Live Corp Company.[8] On January 17, 2013, concept art from the film was released.[17]

The music was composed by Mark Mothersbaugh.[3] Cody Simpson provided a single "La Da Dee", which was played at the film's end credits. Simpson also performed in a music video that incorporated footage from the film.[1] Paul McCartney's single, "New", from his 2013 album, was featured in the film.[18]

Retrieved from "https://movies.fandom.com/wiki/Cloudy_with_a_Chance_of_Meatballs_2?oldid=189330"
Community content is available under CC-BY-SA unless otherwise noted.