Start a Wiki
watch 01:27
The Loop (Movies)
Do you like this video?
Cloverfield 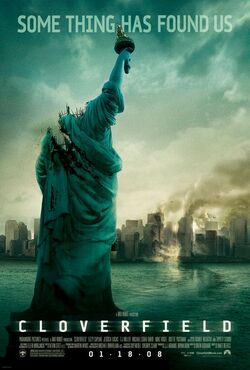 It is the first entry in the Cloverfield film franchise.

The film is presented as footage from a personal camcorder recovered by the United States Department of Defense in the area "formerly known as Central Park", bearing a disclaimer stating multiple sightings of a case designated "Cloverfield".

The film begins on April 27, 2008, at 6:42 AM, as a video taped by Rob Hawkins with his camcorder, at his girlfriend Beth McIntyre's dad's apartment, where they had spent the night while her dad was out of town. He wakes Beth up and asks her if she's ever been to Coney Island, when Beth says she hasn't, the two make plans to go there that day.

The video then unexpectedly cuts to the evening of May 22, 2008. (When the video taped on May 22 was recorded, the tape wasn't changed and the new video was taped over Rob and Beth's Coney Island trip video, with short clips of the video seen throughout the film when the camera has interference.) Rob has a farewell party thrown for him by his brother Jason and Jason's girlfriend Lily Ford, in celebration of Rob's new job in Japan. Their friend, Hud Platt, films testimonials for Rob during the party. Beth brings a new man to the party.

Beth and Rob argue over her guest and Beth leaves. A supposed earthquake strikes shortly after, causing a brief citywide power outage; the local news reports a capsized oil tanker near Liberty Island. When the party-goers leave the building, the severed head of the Statue of Liberty is hurled into the street in front of them. Hud records an enormous creature several blocks away collapsing the Woolworth Building. Later, during the city's evacuation, the creature's tail destroys the Brooklyn Bridge, killing Jason and several other people. News reports show the Army National Guard's 42nd Infantry Division attacking the monster. Smaller parasite creatures resembling six-foot crabs fall off its body and attack nearby pedestrians and soldiers.[a]

By May 23, Rob listens to a phone message from Beth, stating that she is trapped in her apartment at the Time Warner Center and unable to move. Going against the crowd, Rob, Hud, Lily, and another party-goer, Marlena Diamond, venture into Midtown Manhattan to rescue Beth. By 3:17 am, they get caught in a battle between the creature and the Army National Guard and run into the subway, soon attacked by several of the parasitic creatures; during the scuffle, Marlena is bitten by one. The four escape the subway and come to a command center and field hospital. Marlena bleeds from her eyes in reaction to the bite. She is dragged into a tent, where she appears to explode. Rob, intending to save Beth, persuades one of the military leaders to let him go. The man then tells Rob when the last evacuation helicopter will depart before the military executes its "Hammer Down Protocol," which will destroy Manhattan in an attempt to kill the monster.

The group find Beth who is non-fatally impaled on the side of the chest on an exposed rebar which they remove. They rescue her and the four make their way to the evacuation site at Grand Central Terminal, where they encounter the creature once more. Lily is rushed into a departing Marine Corps helicopter and escapes. Moments later, Rob, Beth, and Hud are taken away in a second helicopter and witness the creature being bombed. The bombing causes the creature to fall, but it lunges at the group's helicopter, causing it to crash into Central Park.

Less than an hour later, a voice on the crashed helicopter's radio warns that the Hammer Down protocol will begin in fifteen minutes. The three friends regain consciousness and flee; Hud retrieves the camera when the creature suddenly appears and kills him. Rob and Beth grab the camera and take shelter under an arch as sirens blare and the bombing starts. Rob and Beth take turns leaving their last testimony of the day's events. The bridge crumbles and the camera gets knocked out of Rob's hand and buried beneath some rubble. Rob and Beth proclaim their love for each other just before another bomb goes off, with both screaming as the monster roars.

A final scene shows the ending of Rob and Beth's Coney Island video. In the backdrop, an unknown object crashes into the ocean.

After the credits, an unknown voice is heard saying, "Help us." However, when the audio is reversed, it says, "it's still alive.”

Retrieved from "https://movies.fandom.com/wiki/Cloverfield?oldid=229675"
Community content is available under CC-BY-SA unless otherwise noted.