View src
watch 01:33
House of the Dragon Trailer - The Loop
Do you like this video?
Play Sound
Colin Farrell 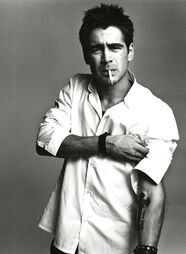 Colin James Farrell (born May 31, 1976) is an Irish actor. He is known for playing prickly, unbridled characters as well as his bad-boy offscreen persona.

Farrell was born in Dublin, Republic of Ireland, and raised as a Roman Catholic. His first acting experience was in small parts on British and Irish television, before his breakthrough role in Tigerland. His next two films, American Outlaws and Hart's War (with Bruce Willis), were not commercially successful, but each of the three films he made in 2003, Phone Booth, S.W.A.T. and The Recruit were box office successes.

His next film, Intermission, was financed and produced in his native country and held the record for the highest-grossing Irish film for several years. Since then he has appeared in Minority Report, A Home At The End Of The World, Alexander, The New World, Ask The Dust, Miami Vice, In Bruges, The Imaginarium of Doctor Parnassus, Crazy Heart, Ondine, London Boulevard, Horrible Bosses (with Miami Vice film co-star Jamie Foxx) and, Fright Night, and his recent credit in Dumbo

He will next be seen in the remake of Total Recall.