Start a Wiki
watch 01:48
The Loop (Movies)
Do you like this video?
Conquest of the Planet of the Apes 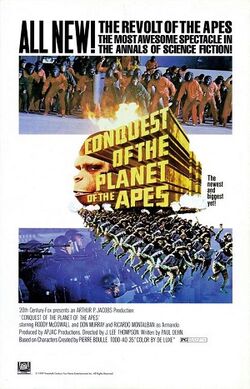 In a futuristic world that has embraced ape slavery, Caesar (Roddy McDowall), the son of the late simians Cornelius and Zira (Kim Hunter), surfaces after almost twenty years of hiding out from the authorities, and prepares for a slave revolt against humanity.

In 1983 (several years after the end of 'Escape from the Planet of the Apes'), an interstellar disease kills the world's cats and dogs, leaving humans with no pet animals. To replace them, humans began keeping monkeys and apes as household pets. In time, humans notice the apes' capacity to learn and adapt; thus they train them to perform menial household tasks. By 1991, the former United States of America and most of the North American continent has become an oppressive and fascist police superstate culture of uniformed classes and castes, based upon ape slave labor. The different apes are divided into similar caste systems; gorillas wear red jumpsuits; chimpanzees wear green jumpsuits; and orangutans wear orange jumpsuits.

In the opening scene, Armando (Ricardo Montalbán) and Caesar (Roddy McDowall), a young chimpanzee horseback rider in Armando's circus, visit a large city to distribute flyers advertising the circus' arrival to town. Armando warns the chimpanzee to be careful; should anyone learn his identity as the child of the late Cornelius and Zira, it would mean their deaths. Walking the streets, they see apes cleaning streets, delivering packages, et cetera, and are shocked by what is done to disobedient apes. Seeing an ape being beaten and drugged by black-uniformed neo-Gestapo police units. Quickly, Armando takes responsibility for the exclamation, explaining to the policemen that it was he who shouted, not his chimpanzee. The surrounding crowd become agitated, and Caesar runs away.

Hiding in a stairway, Armando says he will go to the authorities and settle the matter by bluffing. Meantime, Caesar must hide among his own kind (in a cage of orangutans from Borneo), and soon finds himself being trained for slavery through violent conditioning. He then is sold at auction to the neo-Fascist Governor Breck (Don Murray). Gov. Breck allows the ape to name himself by randomly pointing to a word in a book handed to him and the chimpanzee's finger rests upon the name Caesar, as if by chance (but the audience knows that the ape can read and searched for the name). Caesar is then put to work by Gov. Breck's chief aide, the African-American MacDonald (Hari Rhodes), who sympathizes with the apes to the thinly veiled disgust of his boss, and eventually deduces Casear's true identity.

Meanwhile, Armando is being interrogated by Inspector Kolp (Severn Darden), who suspects his "circus ape" is the child of the two civilized apes from the future back in 1973. Kolp's assistant puts Armando under an authenticator machine that psychologically forces people to be truthful. Rather than confessing, Armando fights the guards and commits suicide by jumping to his death through a window. Learning of the death of the only human he loved, Caesar loses faith in human kindness and begins plotting a simian rebellion.

Secretly, Caesar teaches the combat arts to the other apes and has them gather weapons. Meanwhile, Gov. Breck learns from Inspector Kolp that the manifest of the vessel that delivered Caesar lists no chimpanzees. Suspecting Caesar is the ape the secret police are hunting, Breck's men arrest Caesar and electrically torture him until he speaks, thus betraying his identity. Hearing the confession, Breck orders Caesar's immediate death. Caesar survives his execution because MacDonald, feigning over-sensitivity to torture, reduces the electrical power of the machine. Once Gov. Breck leaves, Caesar kills the torturer and escapes.

Caesar leads an ape revolt against Ape Management and a violent and climatic 25-minute battle begins. The apes are victorious after killing most of the riot police. After bursting into Gov. Breck's command post and killing most of the personnel, Caesar has Breck marched out to be executed in the courtyard. MacDonald appeals to Caesar's humanity to show mercy to his former persecutor. Caesar ignores him, and in a rage declares:

However, as the apes raise their rifles to beat Breck to death, Lisa (Natalie Trundy), Caesar's beloved and later wife, voices her objection. Caesar reconsiders and orders the apes to lower their weapons.

The final shot shows Caesar standing among all his fellow gorillas, chimpanzees, and other apes among the burning buildings as the city burns to the ground.

The film received mixed to positive reviews from critics at the time of its release. It currently holds a 44% 'rotten' rating on Rotten Tomatoes, from 18 reviews, all published from 2000 to 2008.

Retrieved from "https://movies.fandom.com/wiki/Conquest_of_the_Planet_of_the_Apes?oldid=109985"
Community content is available under CC-BY-SA unless otherwise noted.