Start a Wiki
watch 01:21
The Loop (Movies)
Do you like this video?
Coraline 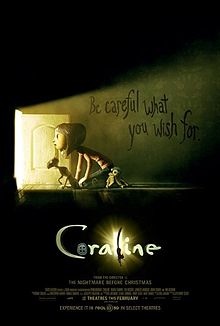 Coraline is a 2008 stop-motion film produced by Universal Studios, Focus Features, and LAIKA.

Coraline Jones moves with her mother and father from their comfortable life in Pontiac, Michigan to the Pink Palace, a dilapitated mansion renovated into an apartment building in Ashland, Oregon, which is also occupied by retired actresses Misses Spink and Forcible, and odd Russian acrobat Mr. Bobinsky. With her parents perpetually working on a gardening catalog and paying little attention to her, Coraline feels neglected and decides to explore their new home, meeting Wyborne "Wybie" Lovat, the grandson of the apartments' landlady. While exploring, Coraline finds a small door sealed off by a brick wall. That night, Coraline is awakened by a mouse and follows it to the small door where she discovers a long, dark corridor in the brick wall's place. Coraline goes through it and finds herself in the Other World, a fantastical parallel version of the Pink Palace inhabited by doppelgangers of her parents called the Other Mother and Other Father, who have black buttons for eyes. These beings prove to be warmer and more attentive than Coraline's real parents, particularly the Other Mother, who does everything she can to impress Coraline. Coraline decides to stay the night at the Other World, but when she wakes the next morning, she finds herself in her old world.

Despite warnings of danger from her neighbors, Coraline continues to go to the Other World at night to escape from the doldrums of her real life and is entertained by button-eyed "Other" versions of her neighbors, including a mute Other Wybie, who guides her through the Other World. During her third visit, Coraline encounters a black cat from her own world that has the ability to talk in the Other World, and also warns Coraline of danger. She disregards the warnings until the Other Mother invites her to live in the Other World forever if she sews buttons over her eyes. Coraline is horrified and demands to return home but the Other Mother angrily reveals her true form as a monstrous witch and traps Coraline in a small room behind a mirror. There she meets the ghosts of three children who had lost their eyes and souls to the Other Mother. One of the girls is Miss Lovat twin sister who "stolen" years ago. They plead to Coraline to avoid their fate and request that she find their eyes to free their souls. With the help of the Other Wybie, Coraline escapes to her own world, but finds that her parents have been kidnapped by the Other Mother.

Retrieved from "https://movies.fandom.com/wiki/Coraline?oldid=264316"
Community content is available under CC-BY-SA unless otherwise noted.