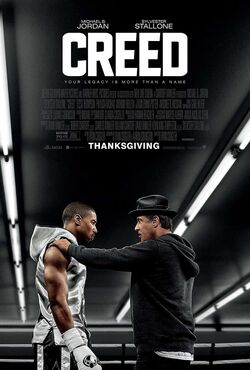 Creed is a 2015 American sports drama film written and directed by Ryan Coogler, co-written by Aaron Covington and produced by Sylvester Stallone, who also co-stars. The film also features Michael B. Jordan, Tessa Thompson, Tony Bellew and Graham McTavish. It is a reboot of the Rocky film series, and as such, is the seventh film in the series.

A sequel will be released in 2018 titled Creed II.

In 1998, Adonis "Donnie" Johnson, the son of an extramarital lover of former heavyweight champion Apollo Creed, is serving time in a Los Angeles youth facility when Creed's wife, Mary Anne, pays him a visit and offers to take him in.

Seventeen years later, Donnie walks away from his job at a securities firm to pursue his dream of becoming a professional boxer. Mary Anne vehemently opposes this, remembering how her husband was killed in the ring 30 years earlier against Ivan Drago. He tries to get a slot at Los Angeles' elite Delphi Boxing Academy, but is turned down. Undaunted, Donnie travels to Philadelphia in hopes of getting in touch with his father's old friend and rival, Rocky Balboa.

Donnie tracks down Rocky at Rocky's Italian restaurant, Adrian's, named in honor of his deceased wife, and asks Rocky to become his trainer. Rocky is reluctant to get back into boxing, having already made a one-off comeback at a very advanced age despite having suffered brain trauma during his career as a fighter. However, he eventually agrees. Donnie trains at the Front Street Gym, with several of Rocky's longtime friends as cornermen, and also finds a love interest in Bianca, an up-and-coming singer and songwriter.

Donnie, now known as "Hollywood Donnie," defeats a local fighter, and word gets out that he is Creed's illegitimate son. Rocky gets a call from the handlers of world light heavyweight champion "Pretty" Ricky Conlan, who is due to be forced into retirement by an impending prison term. He offers to make Donnie his final challenger—provided that he change his name to Adonis "Hollywood Donnie" Creed. Donnie balks at first, wanting to forge his own legacy. However, he eventually agrees.

While helping Donnie train, Rocky learns he has non-Hodgkin's lymphoma. He is unwilling to undergo chemotherapy, remembering that it was not enough to save Adrian when she had ovarian cancer. His diagnosis and the fact that his best friend and brother-in-law Paulia Pennino—Adrian's brother—has now passed away in addition to Adrian, Apollo and his old trainer Mickey Goldmill further force him to confront his own mortality. Seeing Rocky shaken, Donnie urges him to seek treatment.

Donnie fights Conlan in Conlan's hometown of Liverpool. Many parallels are present between Apollo and Rocky's first fight 40 years earlier. Before going into the ring, Donnie receives a present from Mary Anne—new American flag trunks similar to the ones Apollo and later Rocky wore. Additionally, to the surprise of nearly everyone, Donnie goes the distance after giving Conlan all he can handle. Conlan wins on a split decision (just as Apollo retained his title by split decision against Rocky), but Donnie has won the respect of Conlan and the crowd. As Jim Lampley puts it while calling the fight for HBO, "Conlan won the fight, but Creed won the night." Conlan tells Donnie that he is the future of the light heavyweight division.

The movie closes with Donnie and a frail but improving Rocky climbing the 72 steps outside the entrance of the Philadelphia Museum of Art.

On July 24, 2013, it was announced that MGM had signed on with Fruitvale Station director Ryan Coogler to direct a spin-off of Rocky, a seventh film in the Rocky series, which Coogler would also co-write with Aaron Covington. Sylvester Stallone also has been working on the screenplay for the seventh film. The film would focus on a man following in the footsteps of his late father, Apollo Creed, and getting a mentor in the now-retired Rocky Balboa. Michael B. Jordan was set for the role of Creed's son, Adonis Creed, and Stallone was set to reprise his character of Rocky. Original producers Irwin Winkler and Robert Chartoff would produce, along with Stallone and Kevin King-Templeton. On April 25, 2014, while talking to THR, Coogler stated that he had sent his latest draft to the studio, and confirmed the involvement of Jordan and Stallone.

On November 10, real-life boxers Tony Bellew and Andre Ward joined the film, with Bellew to play a fighter, "Pretty" Ricky Conlan, the main opponent for Creed. Shooting was set to begin in January 2015, in Las Vegas and Philadelphia. On December 16, Tessa Thompson was added to the cast as the female lead. On January 8, 2015, Phylicia Rashad reportedly joined the film to play Mary Anne Creed, Apollo's widow. On January 21, Graham McTavish tweeted about his involvement in the film.

Principal photography began on January 19, 2015 in England, with the first scene shot taking place during a football match between Everton F.C. (of which Stallone is an avid fan) and West Bromwich Albion F.C. at Goodison Park in Liverpool.

On February 13, the crew was spotted filming in The Victor Cafe. The cafe was transformed into the Adrian's Restaurant, and crew were again spotted filming there on February 16. Stallone and Jordan were also spotted on the set of the film on February 18. From February 24–27 and then on March 3, filming took place at Sun Center Studios in Aston Township.

The musical score for Creed was written by Swedish composer Ludwig Göransson, who is only the third composer in the history of the Rocky series, following Bill Conti (Rocky I, II, III, V, and Balboa) and Vince DiCola (Rocky IV). Creed also features a soundtrack that consists mostly of music new to the series, including hip hop tracks by artists such as Future, Meek Mill, and White Dave. Both a score and a soundtrack album were released on November 20, 2015 by WaterTower Music and Atlantic Records, respectively.