Start a Wiki
watch 01:27
The Loop (Movies)
Do you like this video?
Creep 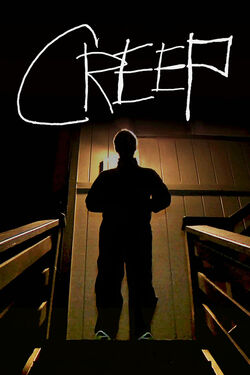 Creep is an American found footage horror film directed by Patrick Brice. The film stars Brice and Mark Duplass. A sequel, titled Creep 2, was released on October 24, 2017. It was directed by Brice and stars Duplass and Desiree Akhavan.

Aaron, a videographer, is driving to meet Josef, who put out an ad for a job. Aaron drives up to a secluded home on a steep driveway, but nobody answers the door so he returns to his car to wait. He seems somewhat nervous due to its secluded nature, and even points to an axe lodged into a tree stump next to the house. Josef startles him by suddenly appearing by the driver side window. Together, they walk into the home, and Josef explains that the home is his family vacation home and that his wife Angela is pregnant. Josef wants to record a series of videos for his unborn son, named "Buddy", due to the fact that he has mere months to live. After beating cancer years ago, it has returned to his brain. Josef exhibits some odd and eccentric behavior such as random hugging, but it seems harmless.

Josef's first request for Aaron is to record him taking a bath. He reminisces fondly about his father bathing with him when he was a baby, and yearns to carry on this tradition. He simulates taking a bath with an invisible baby and Aaron quietly records. Josef then slowly submerges himself in the water as if he was trying to drown himself. It startles Aaron, but Josef lifts himself back up. Next, Josef asks Aaron to go hiking with him and instructs him to go to a closet to get some gear. He is startled by a wolf mask in the closet; Josef tells him that his father used to wear the mask, pretending to be a friendly wolf named Peachfuzz.

While hiking, Josef exhibits more odd behavior. He randomly sprints forward and disappears, and purposely scares Aaron. He claims to know of a secret place with "healing waters" and leads Aaron to a hidden waterfall after a very long hike. They finally find it, and together they wade in the stream and appear relaxed. Josef writes "J+A" on a large stone with a rock, drawing a heart around the initials. Throughout their time together, Josef repeatedly scares Aaron, excusing his behavior by claiming he has a "weird sense of humor." Josef suggests a local restaurant that he went to with his family, and so they go.

At the restaurant, Aaron becomes suspicious that Josef has never been there before due to him being unfamiliar with the menu. The conversation takes an interesting turn as Josef asks Aaron if he has ever been ashamed of anything. Aaron tells him that as a child, he would often pee himself to a point where he wore a monitor to alert him when it became wet. Josef then admits to Aaron that while Aaron was waiting for Josef's arrival at the house, he took several photos of him standing by the front door as if he was secretly watching him. Josef says it was only because he wanted to get to know Aaron before meeting him and apologizes profusely.

They arrive back at the house after dark. Aaron can't wait to leave and is clearly uncomfortable, but Josef asks him to stay for a drink, and he reluctantly agrees to join him. Josef asks Aaron to turn off the camera, claiming that what he was going to say was not appropriate for Buddy. Aaron shuts off the video but continues to record the audio. Josef tells him he lied about Peachfuzz and that it had nothing to do with his dad. The truth is that one day, he checked his internet browser history and discovered that his wife Angela was searching a lot of animal pornography. To confirm his suspicions, he lied about being away for work, and broke into his own home wearing the wolf mask to rape his wife.

Aaron is clearly unsettled and attempts to leave, but is unable to find his car keys. Josef tells Aaron that he should wait to leave till the morning, because the roads are a bit dangerous and that they'll be able to find the keys with daylight. Aaron has no choice but to agree, and can be seen adding something to Josef's whiskey. It was Benadryl, which puts him to sleep. Josef begins to talk in his sleep, saying very disturbing things to Aaron and even begins to touch himself. Aaron suspects that Josef is hiding his keys in his jacket pocket, so he attempts to search Josef while he's asleep. He successfully removes his phone from the pocket, and immediately the phone begins to ring. Aaron frantically runs to the bathroom to answer the phone; it is a woman, which Aaron presumes to be Josef's wife Angela. The woman on the phone is not his wife, but his sister. She states that her brother has problems and instructs Aaron to leave the house immediately for his own safety, with or without his keys.

The call drops, and Aaron returns to find Josef gone from where he was sleeping. Aaron is now completely freaked out and nervously searches the home to find Josef, and goes outside to the balcony. Josef appears out of nowhere and scares him, but tells him that the reason for his strange behavior is that he doesn't want to die. Aaron reveals to Josef that he spoke to his sister and that he wants to help him, but he becomes angry and runs back into the home and disappears. Aaron attempts to leave and goes straight for the front door, but finds Josef blocking it while wearing the Peachfuzz mask. Aaron pleads with Josef to let him leave, but Josef quietly shakes his head 'no' and begins to growl and rub his body on the door in an erotic manner. Aaron charges at him, and the camera shuts off.

Aaron is now recording himself at home. He receives a DVD in the mail from Josef. The footage depicts Josef dragging filled trash bags up a hill, and burying them. Aaron thinks it is meant as a threat, but does not call the police thinking this will just go away. At night, Aaron admits that he has been having terrible nightmares about Josef wearing a wolf mask and Aaron wearing a baby mask, dancing in the waterfall they previously visited.

The next morning, Aaron finds a large package at his front door, inside is a knife and another DVD. Josef apologizes and says that he really cares about Aaron, but now repeatedly calls Aaron "Buddy" instead. He says to find the stuffed wolf animal in the box, and per Josef's instructions, Aaron rips open the stuffed animal to find a locket with Josef's and Aaron's pictures in it. Upset and disgusted, Aaron throws everything away.

Aaron decides to go to the police, which are no help due to the fact that he does not know anything about Josef, including his full name. Another night, Aaron hears odd noises in his home which prompts him to investigate. The camera is left in the bedroom in direct view of the front door, and as Aaron searches his home, Josef can be seen standing at the front door, looking into the house completely still. As Aaron approaches, Josef runs away. Aaron searches down an alleyway next to his house, only to find his trash knocked over. He believes that the noises were caused by raccoons who ransacked the garbage. Later that night as Aaron sleeps, Josef has broken into the home and turns on the camera and films a sleeping Aaron. He picks up the camera, revealing that Aaron had peed himself in bed. Josef even cuts off a lock of Aaron's hair, all while he is sound asleep.

Aaron wakes up to find that the screen in his window ripped, and another DVD labeled "My Last Video" next to his bed. Josef, in the video, apologizes again, revealing that he found the locket in Aaron's trash, which hurt him greatly, but states that they are now "even" because he knew that Aaron drugged him in the house. He claims this led to the realization that he needs help, as he is sad, needs a friend, and is completely lonely. He asks Aaron to come to a public lake by his house to talk so they could finally have "closure." To the naive Aaron, his pleas seem somewhat genuine, so he accepts the invitation. Aaron goes to the location and leaves the camera rolling from his car. Aaron sits on a bench and waits. Josef sneaks up from behind, puts on the Peachfuzz mask, and strikes Aaron in the head with an axe.

Josef films himself watching the murder tape. He expresses admiration and even puzzlement at Aaron's naivety and kindness, and claims he loves him and considers him to be his favorite "of them all." He puts a DVD labeled "Aaron <3" in a cabinet full of videos and DVDs with many other names on them.

On another phone-call, he identifies himself as Bill to a videographer who responded to another one of his ads.

Retrieved from "https://movies.fandom.com/wiki/Creep_(2014)?oldid=154446"
Community content is available under CC-BY-SA unless otherwise noted.