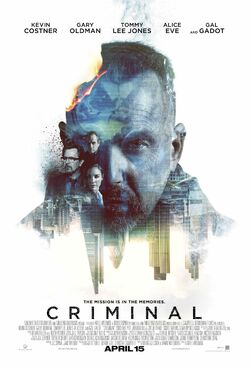 Criminal is a 2016 action thriller film directed by Ariel Vromen and written by Douglas Cook and David Weisberg. It stars Kevin Costner, Gary Oldman and Tommy Lee Jones in their second collaboration following the 1991 film JFK. The film was released on April 15, 2016 by Summit Entertaiment.

CIA agent Bill Pope (Ryan Reynolds) dies while traveling to a secret location to meet a hacker who can launch missiles at will. Desperate to find his whereabouts, officials turn to an experimental neurosurgeon who can transfer memories from one brain to another. The guinea pig for the procedure is Jerico Stewart (Kevin Costner), a violent and dangerous death-row inmate. Now gifted with Pope's skills and knowledge, Stewart must race against time to stop a sinister international conspiracy.

Retrieved from "https://movies.fandom.com/wiki/Criminal_(2016)?oldid=102498"
Community content is available under CC-BY-SA unless otherwise noted.