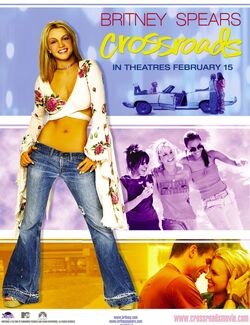 As children, Lucy Wagner (Britney Spears) and her best friends Kit (Zoe Saldana) & Mimi (Taryn Manning) bury a wish box in the ground, promising to dig it up on the night of their high school graduation, pledging to stay best friends forever.

As they reach their high school years, the three girls have gone their separate ways: Lucy has become the valedictorian, Kit has become a popular prom queen who is engaged to be married and Mimi is a soon-to-be teenage mother.

On the night of their high school graduation, the girls get together to dig up the wish box. After Mimi brings up the topic of attending an audition for a recording contract in Los Angeles California, the girls decide to hit the road together; Lucy to visit her mother (Kim Cattrall) and Kit to visit her fiance, Dylan (Richard Voll).

While on the road, the girls meet a guy named Ben (Anson Mount) but they become fearful of him when they hear a rumor that he might be a dangerous criminal, but it is later revealed that Ben was in jail for getting his step-sister across state borders to escape her abusive father.

When Lucy finally meets her mother, Caroline (who abandoned Lucy when she was young), she learns that Caroline never wanted her. Sadden by the revelation, Lucy rejoins Ben and her friends on the road to Los Angeles.

When they get there, Kit sees Dylan cheating on her with another girl & learns that Dylan sexually assaulted Mimi and got her pregnant, causing her to punch him. Mimi falls down the stairs, causing her to lose her unborn child.

Despite her father, Pete (Dan Aykroyd)'s wishes, Lucy decides to stay in Los Angeles and goes to the audition for the recording contract.

In early 2001, Britney Spears said that she had plans to make her film debut. She and her team then created a concept for it which was later developed by Shonda Rimes (the creator of ABC's "Grey's Anatomy").

Spears commented that she "talked to [Rhimes] and told her what I wanted the movie to be about and she elaborated on it. It was my little project. When you do a movie, I think you have to be really passionate about it. I was having a lot of offers, but this is something my heart was into".

The filming for "Crossroads" began in March of 2001 in Baton Rouge and Hammond, Louisiana, (near Britney Spears' hometown).

Due to the fact that Spears was also recording her third studio album along with the film's production, the filming wrapped up after six months of shooting.

The additional scenes were filmed in Los Angeles, California. It had a total budget of $10 million which was a relatively low budget by industry standards.

According to the Louisiana Film and Video Commission, the film was originally titled "What Friends are For."

Spears described it as a teen movie that deals with real issues that normal teenagers live on a daily basis.

She continued to explain the film's content, saying that it "is about this journey that the three of us best friends take, finding ourselves and what we want out of life and getting our friendship back. Friends are all you have at the end of the day. When your boyfriend breaks up with you, who do you call? Your girlfriend. I just love that message".

Justin Long (who plays one of Lucy's best friends from high school) thought that the film is "like a road trip buddy movie for girls".

He also said that he was impressed by Spears' work ethic, commenting that "she could not have been more down to earth. She's the sweetest girl. After 10 minutes, I forgot she was a big pop star".

Anson Mount (who plays Ben) revealed that actor Robert De Niro ran a few of Britney Spears' lines with him while rehearsing for the film. He also revealed that De Niro called her "a sweet girl" and convinced him to do "Crossroads."

"Crossroads" debuted at #2 at the box office, grossing $14,527,187 during its opening weekend and grossed an estimated $5.2 million in 2,380 theaters, becoming the second highest grossing film of the day.

It has has a 14% approval rating on the review aggregator website Rotten Tomatoes, based on 103 reviews with an average rating of 3.9/10, with the consensus: "A cliched and silly pop star vanity project, Crossroads is strictly for Britney fans only".

Metacritic (which assigns a weighted average score) gave the film a 27 out of 100 based on 31 reviews from critics.

Robert K. Elder of Chicago Tribune said, "Spears delivers a performance with the same sincerity she invests into a Pepsi commercial, only this film contains twice the sugary calories".

Maitland McDonagh of TV Guide commented that "the film's mealy-mouthed messages about feminine empowerment will almost certainly fall on deaf ears, since even 11-year-olds know Spears's power resides largely in her taut torso".

Claudia Puig of USA Today considered it "less a movie than a mind-numbingly dull road trip", while The Washington Post reporter Ann Hornaday said, "not a music video, not yet a movie, but more like an extended-play advertisement for the Product that is Britney".

Jane Dark of Village Voice compared Crossroads to Mariah Carey's Glitter, saying, "you spend a lot of time wondering, 'Better or worse than Glitter?' You think if the projectionist cranked the volume a little you could actually sort of get into this".

John Anderson of Los Angeles Times commented, "Spears acquits herself as well as anyone might, in a movie as contrived and lazy as this one".

Chris Kaltenbach of Baltimore Sun said, "go see Crossroads if you want to hear Britney sing or see her wear next-to-nothing. But otherwise, avoid this train wreck at all costs".

However, Lisa Schwarzbaum of Entertainment Weekly gave the movie a positive review, commenting that the film "not only makes excellent use of the singer's sweetly coltish acting abilities, but it also promotes a standardized set of sturdy values with none of Mariah Carey's desperate Glitter, or any of Mandy Moore's gummy pap in A Walk to Remember".

Bret Fetzer of Amazon.com also gave a positive review, noting that the movie "could have been trite schmaltz, but the script has some grit and the direction is fresh and relaxed--and, most significantly, Spears is far more sympathetic and engaging than you might expect".

Jane Crowther of BBC applauded Kim Cattrall and Dan Aykroyd's interactions with the characters, and said that "Spears manages to come across on film as natural, endearing, and extremely likable".

Time magazine named it one of the top 10 worst chick flicks.